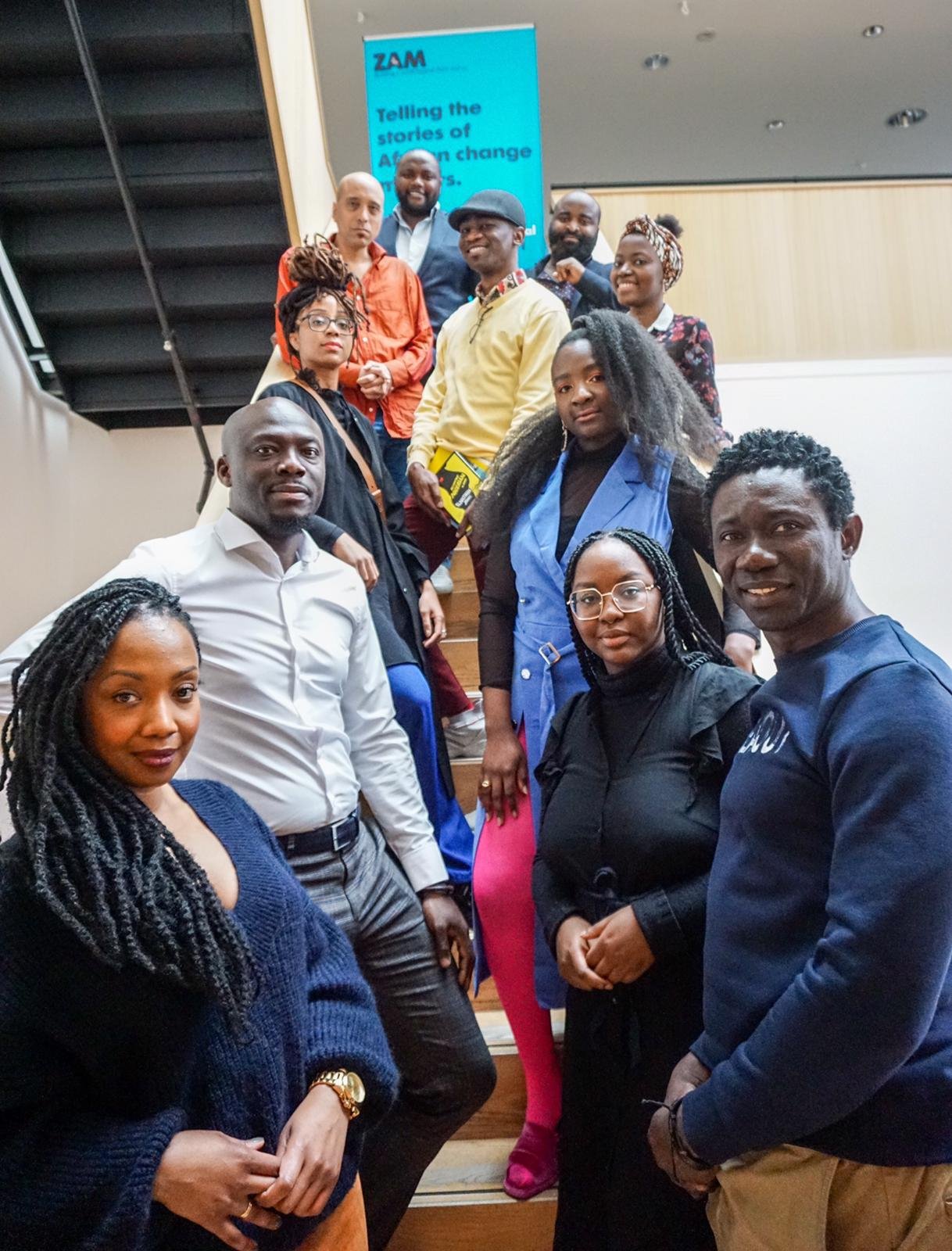 On Saturday, 29 February, Elnathan John met with Netherlands based writers from African descent.

Elnathan John is in town. We, writers from African descent, living in the Netherlands, meet on the eve of the Nelson Mandela Lecture at the International Theatre Amsterdam – a place commonly associated with ballets, orchestras and monotone audiences: but this time, a motley mix of the masses will gather to hear a Nigerian satirist who lives in Berlin speak about ‘How To Truly Decolonize’…

… But first things first.
A day before he is due to speak, we meet the famed satirist who has twice been shortlisted for the Caine Prize, won 2017’s Betty Trask Award and was a judge for the Man Booker International Prize. The Lloyd Hotel, along Amsterdam’s IJ river, is the venue of the tête-à-tête. It’s a historic place. The port of departure for travelers to the New World, who headed to America’s shores nearly a century and a half ago. It was also a port health station, for checking the vaccination status of travelers: an interesting coincidence in the week that the novel coronavirus made landfall in both the Netherlands, and Nigeria.

Nigeria is the first topic we get off the table, at this meeting, attended by 10 writers. It is where Elnathan became a writer, with the biggest publishing house, the same one behind other successes like Teju Cole and Chimamanda Adichie. Four novels later, Elnathan has been subcontracted by agents and publishers in Europe & America. His 2017 debut, ‘Born on a Tuesday’, delves beyond the menace of the Boko Haram insurgency in Nigeria’s north east, into the nitty-gritty of personal lives affected and displaced, and from those threads, he weaves a coming-of-age novel about life, friendship and loss.

We discuss the advantage of having a Nigeria-based publisher for a Nigerian or African writer. For instance, you can choose themes that otherwise would be censored out by Western publishers. Not that censorship is exclusively western, but there are perhaps different censorships in different cultures, and for Elnathan’s content, Cassava Republic has freed him to say the frequently unsaid.

But, we also learn that writing hardly pays. The myth of the successful writer is just that: a myth! But write we must, and eventually, successful publishing houses do find a way to balance the interests of individual writers with the markets and the money they make from the more marketable types of writing, such as big time memoirs.

But today, we focus on other things.

Other things that resonate with wider audiences, like with Africans writers in the Netherlands. The first thing we learn, among ourselves, is that being black and African, do not necessarily coincide. As the discussion unfolds, we learn to make space for the complexity and personal experience that makes the black experience everything except a monolith. And, we can do that without sacrificing authenticity.

Experience has taught all of us to learn to navigate the elephant in the room: race.
Every person expects an African to be obsessed with race. Not that they thank us when we focus on it, but when we choose other themes, they may judge us for straying ‘out of character’. The writers in this room want to navigate non-stereotyping stories. Anything from walking in a park, to describing a paper clip. Yes, we are other things too, but black.

After brief self-introductions, it’s time for each writer to chip in, and Christelle, Rwandan-born, is the first to go. She’s also the polar opposite of the African writer stereotype, saying she finds the stereotypical struggle-biography boring: she is the one who wants to navigate paper clips.

Ayo, Nigerian-born, is the doctor in the group. Yes, doctors can be writers too, which is good, in case writing doesn’t make any money. But, Ayo’s concern is the other box he must fit in: the stereotype of the African immigrant as one fleeing from something. He made a choice to stay in the Netherlands, despite being happy in Nigeria. That is a nuance that is missing in profiling by Dutch police, politicians and researchers, and Elnathan himself agrees, saying “I will never know what it feels like to be a drug dealing illegal immigrant.”
Maybe it just privilege. Well, that’s a thing too.

Claris, Sabrina and even Christelle earlier, find common bond, and refer to each other as “just like me” over and over. But sometimes, they clash. Like when the former were published in a “black” anthology, and other black people who were not born in Africa pushed back, saying they weren’t representative of blackness.

So what is black, enough?
For Angelique, who is a former lawyer, like Elnathan, it’s the tension in the cultural experiences between black populations in different Dutch cities: from the Hague to Amsterdam, and Rotterdam, each community is creating its own brand, almost never crossing to the other. She’s also had her authenticity tested by Africans, whose various identities she represents as an organizer of film festivals in the Hague, and a a board member at ZAM.

Pelumi takes it all in, quietly. She’s the student, and the youngest of the group. Her focus is poetry and theater, and she doesn’t yet feel drawn to define where they will lead her, or if she will identify with black social and political battles, as part of her oeuvre. And this too, is authentically African.

Ah. Kiza. Already the star of many op eds and a prolific speaker, he is finishing his debut novel: about his attempt to become Dutch. Meanwhile, he works for a Dutch think tank, and though authentic in the different worlds he occupies, yet he’s never one thing.

What does that even mean?
For someone like Panzu, he feels it is fatal to even write down your political views and social experiences. What if you change your mind, as you grow, and you cant retract what you’ve been quoted for?

And growth, growth is the essence that defines today’s meeting. Babah will sum it up nicely layer, but first we have to share a little lunch. After all, sharing is the most authentically African thing.

This time, Elnathan lets us in on what he is writing now. His obsession is pre-colonial African history. Yes, tomorrow he will go on and on about colonialism and decolonization, but here and now, it’s what came before that is sweeter. He finds that there are minor characters hidden in most histories, most of whom are women, and in his upcoming novel, he teases out one of them, a woman who enthroned a caliphate in ancient Northern Nigeria, but whose legacies are mostly attributed to her husband. Very timely, this. Feminist, Elnathan.

Tomorrow will be fun, we think. The Dutch will thoroughly dig Elnathan’s lecture. We all nod in agreement, the curt African nod that needs no words. Elnathan confesses he is the beneficiary of the European fetish for “authentic blackness”, but is also wary of how that excludes others who are perceived as not being black enough for the diversity agenda. So he cautions, wisely: “we also have to critique the things that we benefit from.”

As we begin to close, we return once more to Nigeria, the center of Elnathan’s praxis. His interview in the daily Trouw, which has gone viral, is a rebuttal of Nigeria’s claim to superpower status. If he could say ‘bullshit’, he would, but Elnathan is a child of God, so instead, he says “we should favor healthy competition between all African countries, instead of just cooperation, otherwise, we are just trying to out-oppress one another”.

As for his home country, he avers, “there’s no deliberate progress that’s happening there. Nigeria is not a superpower at all”.

Babah probes: but what about religion? Nigeria has large quantities of that export commodity. And in true nuanced style, Elnathan explains, “yes” which is both good and bad. Good because religion is a balm for people’s wounded-ness. Bad because, like anesthesia, it numbs their consciousnesses and consciences to stupor.”

Wow. Is there no end to the allusions, allegories and witticisms, from this vibrant collective of writers on a windy Saturday afternoon in Amsterdam?

Maybe not, but there is an end to this meeting. And it is here now.
Souls emptied, and stomachs filled, we rise for a group photograph, coordinated by none other, than Elnathan. This satirist, he seems, multitalented?
And multi-dimensionality is the word that sums up todays meeting.
We are all black writers, of African origin, in the Netherlands, but we are complex too. And yes, we talk about race, and colonialism. But, we also want to get away and walk in the woods, and describe paper clips, and other boring things.

It was nice for African writers in the Netherlands to gather.
It’s a colloquium that bears repeating.
It was nice to talk with Elnathan.
Can’t wait to see what he will do with his audience. Or what they will do with him.
One thing it won’t be: like paper clips, boring.