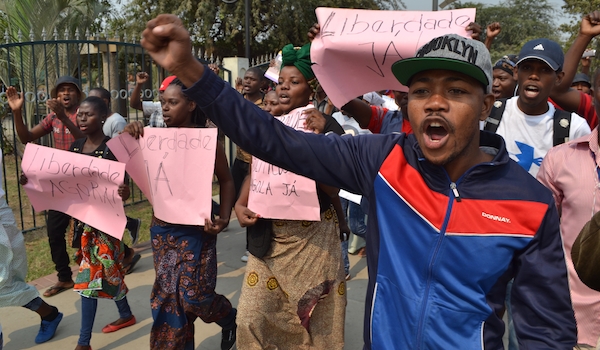 The ‘Africa Rising’ slogan, which depicts the continent as one whole happy black-and-gold glob uplifting itself from misery, is old, discredited and serves dictatorial and corrupt African regimes more than anyone else. It is, –according to the latest economic research- also untrue. Africa as a whole is not getting richer, even if some corrupt elites are. Like everywhere else, the gap between rich and poor is widening.
Enter “Africans rising.”

Africans. Rising. Now we’re talking. Here is, finally, a slogan that does justice to real people who stand for change in so many African countries. Citizens who have had just about enough of the Mugabes, the Dos Santos’s, the Jacob Zumas, the Joseph Kabilas. There may not be hundreds of thousands yet, but something is indeed stirring. All over the continent, African citizens are tweeting, getting together, marching, posting petitions and getting themselves arrested –and then, through common action, freed again. The ‘This Flag’ movement in Zimbabwe got thousands into the streets in September; Balai Citoyen, the ‘citizens’ broom,’ swept old dictator Blaise Compaoré out of Burkina Faso in 2014 and reverted a coup d’etat by the dictators old army buddy, General Diendéré, in 2015. The movement now protests against Western ‘help’ in an overzealous ‘War on Terror’ that creates more terrorists than it stops.

In Angola, activist students got detained, then freed, because of public outrage; then hundreds of citizens got into the streets in August to protest the demolition of a living area in the capital Luanda. South Africa is in turmoil because of the corrupt Zuma regime; thousands are expected to gather at the court on 2 November, when Zuma’s arch enemy, finance minister ‘Mr Clean’ Pravin Gordhan must face trumped-up charges. In the DRC, protests against Joseph Kabila’s elite’s looting of the country’s riches and his continued reign grow by the day. Similar protests are happening in Ethiopia, Gabon, Uganda.

The parallels in the situations these groups of citizens find themselves in are many: poverty and an exploited, colonial past; regimes that emanated from struggles for liberation and independence but that got perverted and calcified into dictatorships; a state machinery that was never designed to service citizens but only to take out wealth.

On 23 and 24 August in Arusha, Tanzania, two-hundred-and-seventy-two African activists met to discuss these parallels. Even if all they did so far was create a new structure and a declaration, the declaration is a good one. Read the declaration here. Also important in what they discussed was the remark, made by deputy director of the new structure Moses Isooba, that ‘this is not about CSO’s (short for Civil Society Organisations, EG) but about individuals.’

He put the finger on a phenomenon which has, heretofore, somewhat obscured the reality of people’s struggles in the developing world: that of the charitable and often foreign donor-steered ‘civil society’ NGOs which, though designed to simply help a bit here and there, have been mistaken for genuine organisations of citizens.

The difference, which should have been clear to all, but often wasn’t, is that a helpful charity, at best, does things for you. However, it isn’t you. An anti-AIDS NGO in Cameroon may print informative booklets on how to avoid getting AIDS; it is not a substitute for people’s action for better health care in government clinics. An anti-child-labour campaign may spread the message that children should go to school; it cannot and does not help to increase the income of a farming family that struggles to pay school fees.

Increasingly therefore, the question is asked whether African citizens who rise in protest against corrupt regimes benefit much from NGOs when it comes to such social struggles. After all, NGOs often stay away from political activism because they depend on government goodwill. This is the subject of a much awaited transnational investigation by the investigative journalists of the African Investigative Publishing Collective.

>Like our partners in the AIPC, ZAM is set to support Africans rising for democracy, accountability, human rights and sustainable development. What role will be played by organisations, what by ordinary individual citizens, and whether they will receive foreign support from those in other countries who stand in solidarity will be the questions to watch.