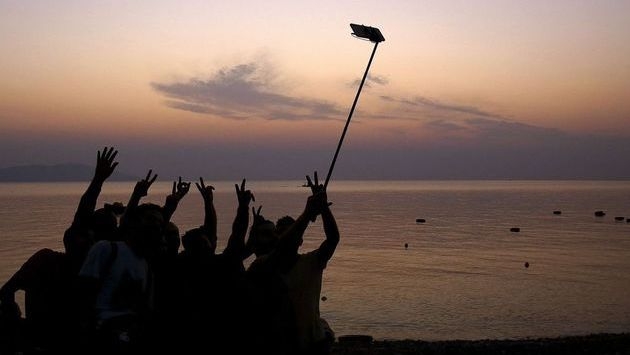 Uncle Tom has been preoccupied with pictures lately. First there was the one of the happy young men who had reached a Greek beach after crossing the Mediterranean from Syria. They made victory signs and took a selfie. With a stick.

That stick caused a tsunami of comments in the European media. (See on of the articles here.) Where did they get this selfie stick from? How did they pack a selfie stick when fleeing their burning, grenade-shelled homes in Syria? They had all the time in the world then, these so-called refugees? They were clearly just coming to Islamise us, that was all there was to it. And now ‘we’ were going to ‘pay their phone bill,’ too.

Then there was this other picture. Of three black men hanging upside down, their faces grimacing in pain, their hands chained. First circulated as an advert for the Italian anti-slavery movie ‘Farewell Uncle Tom’ (1971), the picture was published recently again at the occasion of Fantastic Fest, a movie festival held last month in Austin, Texas. According to the reviews, the movie, -the title of which naturally caught my eye- is a cult ‘fest’ of tortured blacks, raped blacks, whipped blacks, blacks with teeth knocked out, upside down blacks, starved blacks, murdered blacks, and some more sexually assaulted blacks for good measure.

Meant as an anti-slavery movie, I read that it was filmed in Haiti with the blessing of then dictator Papa Doc Duvalier, who had –at the request of the nice Italian gentlemen who were concerned about slavery- organised hundreds of his people to, for a few pennies, play the roles of these abused black slaves. They had faced real hardship whilst doing this and played their roles very naturally. “The film, in order to show that it is wrong to dehumanise and abuse people, dehumanises and abuses people,” said the review I read.

Combined, the two pictures show an astonishing reality. Seemingly, many people -from Italian filmmakers to Haitian dictators to festival organisers in Texas- love to see raped, tortured, beaten and hanging people. But a picture of healthy youngsters celebrating after a risky journey makes people angry. We don’t like young professionals who had to leave their country because of a war and who are now energetically starting a new life elsewhere. We like our ‘others’ chained and upside down.

I guess it is not ‘Farewell Uncle Tom’ at all. To me it feels like ‘hello’ all over again.