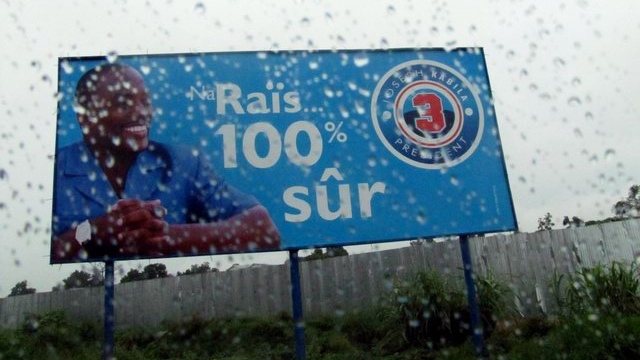 The revelations in the Panama Papers –offshore account details held by the global rich and powerful, unearthed by the International Consortium of Investigative Journalists (ICIJ) last week- have caused turmoil in the Democratic Republic of Congo because of their mention of President Joseph Kabila’s twin sister, Jaynet. All of a sudden, the rumours around Jaynet’s business deals and suspicions that she was the channel through which the wealthy family is moving Congo’s money out of the country, started to make sense. But journalists have been threatened with jail if they write about Jaynet and her account.

“It’s not against the law to have a bank account abroad,” DRC government spokesman Lambert Mende told journalists last week. “Therefore, if I was a journalist I would be careful not to smear anyone’s reputation. A person whose reputation is smeared by the mere allegation of having a foreign bank account, might well take such a journalist to court.” In the DRC, ‘press delicts’ are a crime which can be, and have been, punished with real jail time.

As a result, investigative-minded Congolese journalists are working extra hard to unearth more detail around Jaynet Kabila’s business dealings and the source of her wealth. So far the stories they are seeking to extend are those to do with her involvement in the US$ 500 million upgrade of Matadi harbour on the  Congo river, a deal in which she stands to gain a neat slice of US$ 36 million; her indirect 9,6 % stake in mobile phone operator Vodacom Congo and the benefits reportedly accrued to her from the privatisation of the DRC’s state printing agency, which prints official papers such as passports.

Congolese journalists in the AIPC -ZAM network –who prefer to remain underground for the time being- have offered the ICIJ their full cooperation in combing through the Panama papers sections that impact on the DRC.

The Panama Papers have so far also drawn renewed attention to mysterious business dealings in the DRC in 2010 by South African President Jacob Zuma’s nephew, Khulubuse Zuma. It is still unclear how exactly Khulubuse Zuma then came to possess a US$ 6 billion share of Congolese oil fields a few months after his uncle Jacob had had a meeting with President Joseph Kabila. The ICIJ investigation now unearthed a Panama bank account held by Caprikat Ltd, the company through which Khulubuse Zuma dealt at the time.