Open Letter to the ANC 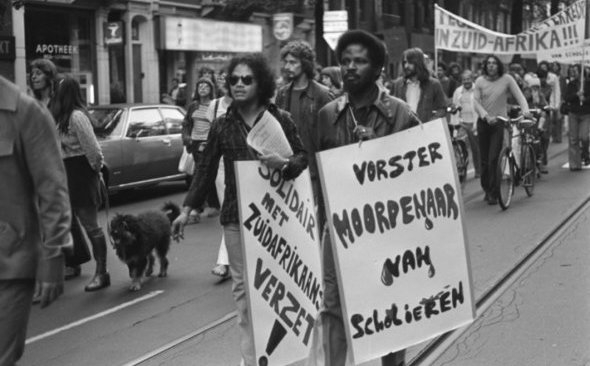 Former members of the leadership of the Anti Apartheid Movement Netherlands (AABN) have spoken out in solidarity with 'many South Africans who raise their voice against state capture and the defilement of shared ideals'. In an Open Letter to the ANC they express their 'grave concern' about recent investigation by the South African police.

The Letter reads as follows:

We, former members of the Anti Apartheid Movement Netherlands (AABN), express our grave concern about recent police and other official investigations into some of our comrades.

In the days of apartheid we all met and interacted with Ivan Pillay and so many others who were engaged in the struggle for liberation, Umkhonto we Sizwe, Operation Vula, Radio Freedom, Medu and the Solomon Mahlangu Freedom College. These were the days of international solidarity and the campaigns for the release of Mandela, the Culture in Another South Africa (CASA) event and the Malibongwe women’s conference, both a meeting point for hundreds of South Africans in Amsterdam.

Ivan Pillay is known to us as a courageous freedom fighter who risked his life for years in the forward areas of the struggle. We also fondly remember other, equally courageous, women and men of integrity like Pravin Gordhan and many more.

We are aware that institutions such as the Treasury and the South African Revenue Services (SARS) were shining examples of good governance. SARS has over the years been a generator of resources needed for the transformation of South Africa into the country as pursued in the ANC’s Freedom Charter: a place ‘for everyone who lives in it’, with rights, opportunities and education for all, bridging the gap between haves and have nots in realizing a better life for all.

We were driven by a conviction that building solidarity with the struggle against the evils of racism, humiliation and destruction of human capital would help bring a new South Africa come to live, as an inspiration to all worldwide who share the ideals of freedom, equality and justice.

Today, it is exactly that conviction that prompt us to speak out in support of many South Africans who raise their voices against state capture and the defilement of our shared ideals.

The AABN was disbanded in October 1994. Today, many former members are part of the network of ZAM magazine. More info: www.zammagazine.com