Burkina Faso | A coup for impunity 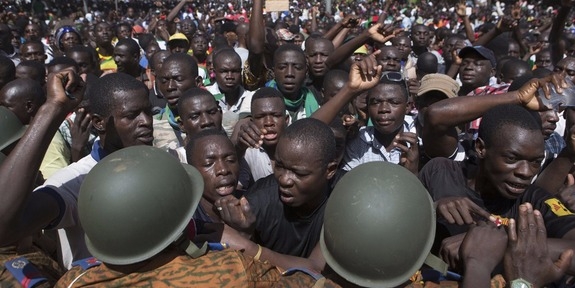 On Wednesday 16 September the military in Burkina Faso –or rather an armed gang of 1,300 men who consider themselves above the law- staged a coup d’etat in that country. The Régiment de Sécurité Présidentiel (or RSP), intimately associated with Blaise Compaoré, -the autocratic ruler the Burkinabè people chased from power in October 2014-, clearly feels it needs to be back on top, if only to avoid ever being called to account for its many crimes.

Ever since the demise of the dictator, and the installation of a transitional government that was preparing for democratic elections to be held on October 11 this year, the RSP and its leader General Gilbert Diendéré, had been working hard to maintain their relevance and, more than anything else, their impunity in the country.  RSP members already interfered with the transition on three occasions: disrupting cabinet meetings, walking into radio stations fully armed demanding airtime and shooting in the air from their camp right behind the presidential palace. In order to safeguard Burkina Faso’s transition to its first meaningful election in well over four decades, interim president Michel Kafando and interim Prime Minister Yacouba Isaac Zida (himself the former second-in-command of the RSP) always granted their wishes. Now Diendéré and his gang have rewarded them with a full-blown coup d’état.

Skeletons in the closet

The RSP had good reason to fear an incoming elected government. Starting with the brutal assassination of Captain Thomas Sankara and most of his associates in October 1987, passing through the targeted killing of investigative journalist Norbert Zongo in 1998, the highly suspect death of constitutional court judge Salifou Nébié in May last year and ending with the shooting, in the back, of demonstrators during the October 2015 uprising, the list of their crimes is long. In 2013, an RSP corporal shot dead his girlfriend, Bernadette Tiendrébéogo because she had ended their relationship; the murder provoked riots in the neighbourhood where she lived. There are many more skeletons in their closets.

This, then, is at the heart of the coup. The RSP tells the world it is still needed; what it does not tell the world is that it very much wants its crimes to remain without punishment. As Election Day came closer, that spectre of justice loomed ever larger and so the RSP decided to act. As a result, instead of a serious attempt at democracy, the Burkinabè now have a military junta, arguably even more detested than the government they removed less than a year ago.

Should renegade regimes be offered free passage if they let their ‘hostages’ go?

Which leads us to a heretical question: is it possible, even desirable, to let renegade regimes go without bringing the issue of punishment into the equation, so we can be shod of them? True, the International Criminal Court and the NGO lobby that shaped it will be horrified by the mere question alone. But some kind of guaranteed free passage, very much in the way that authorities grant hostage takers the option of leaving if they do not harm their hostages, may prevent the dreadful scenario that is now playing out in Burkina Faso. It would be far from elegant but jailing an entire nation in order to escape justice is even uglier.

Bram Posthumus is a veteran reporter who specializes in West and Central African politics. He lives and works in Ouagadougou, Burkina Faso.