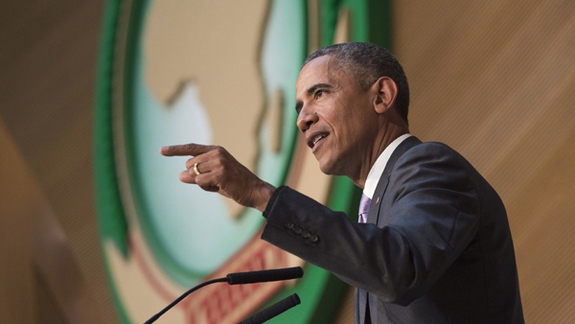 A sharp attack on US President Barack Obama in an Al Jazeera column by Ugandan media owner and opinion leader Andrew Mwenda went viral yesterday on social media. Following Obama’s recent visit to Kenya and Ethiopia, Mwenda, founder and owner of the Ugandan newspaper The Independent, accused the US President of being a ‘colonial headman’ who came to tell ‘the natives’ how to behave. "Obama, being of African ancestry, is a puppet used by the US to disguise its contempt for Africans," Mwenda wrote in the piece which has been widely shared and liked, often by -clearly anti-imperialist-westerners.

The column, however, is little more than a lengthy ‘but you were wrong first.’ Mwenda says Obama has no right to speak because of the history of Western colonialism, racism, land theft and oppression in Africa. His advice to Obama: think of your own misdeeds before you look at ours. And why, he asks, does the US President, when visiting Europe, keep his mouth shut about the wrongs on that continent?

To start with the latter: he doesn’t. Whether one agrees with him or not, Obama did admonish European leaders during a recent visit to Berlin for spending too little on their militaries, saying that they were always making the US do the dirty work in the world. During the most recent euro crisis around Greece, he also repeatedly criticised Merkel’s and Dijsselbloem’s approach.

The rest is much of a muchness. Yes, American presidents are accountable for virulent racism, disastrous political decisions, devastating military invasions and right-wing-Christian conditions for assistance in the fight against AIDS in Africa. Obama has repeatedly engaged on these issues, not shying away from criticising ‘the West’s’ accountability for colonialism and slavery.

Obama is also a product of the American civil rights movement in the US and its solidarity with the struggle against colonialism and apartheid in Africa. It's downright misleading to, as Mwenda does, blame Obama for not criticising Europe’s immigration policy, when the same US President is working on a plan to legalise millions of presently illegal Mexicans in his country.

There is still much to criticise when it comes to the role the United States play in the world. But Mwenda overlooks the fact that Obama, during his visits to Kenya and Ethiopia, has profiled himself more than anything else as an advocate for those Africans who stand up for justice and democracy. His swipes at power abuse by leaders who position themselves as absolutely eternal will be warmly welcomed by masses of Africans. Furthermore, whilst he was referring mainly to Burundi, it shouldn’t go unnoticed that the ‘two- term’ remark also applied to Rwandan President Paul Kagame, a US ally who has, in the meantime, overturned his country’s constitutional obstacles to a third term.

In the days of the colonies, white masters used to regard ‘Africans’ as no more than an amorphous mass of more or less identical beings. Nowadays, quite a few western ‘do-gooders’, too, display that tendency. We recognise it again in this Al Jazeera column. Mwenda presents a ‘We, Africans’ as a single category, defending itself against an -equally uniform, all evil- outside world. Ultimately however, Obama shows more solidarity with African citizens who oppose the destruction of civil liberties in the fight against terrorism and who participate in student movements in Ethiopia, gay rights struggles in Uganda and pro-democracy protests in Rwanda, than Andrew M. Mwenda does.

Bart Luirink is editor of ZAM