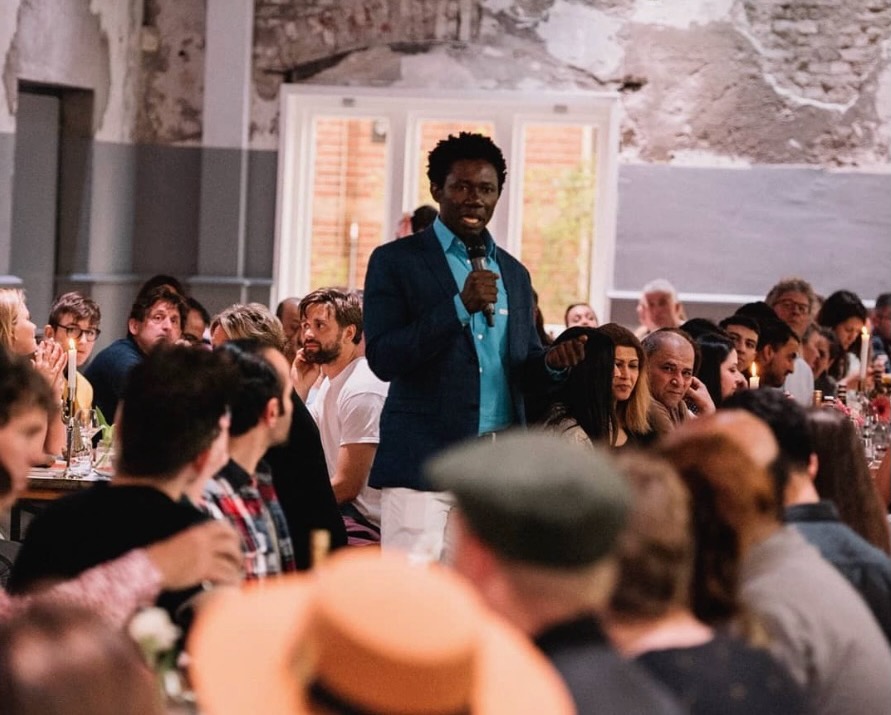 The picture frame I see in front of me is made of gold, but the picture it surrounds portrays an invading army. This is a metaphor I often use in my training sessions to empower new migrants and refugees in the Netherlands. I tell them to create their own golden frame. And I convince them that they should never let anyone convince them to believe their frames are made of ash or toilet paper. Teaching people to believe in themselves is paramount, because if they don’t believe in themselves, who else will? The asylum system? Politicians? The media?

When refugees or migrants arrive in a new country, we usually first learn about their arrival through the media. As facilitators of public debate, the media play an outsized role in shaping how these new arrivals are welcomed by their host country. By deciding how to present the facts, they set the tone and pace for both the public and politicians to form opinions and act accordingly. When a negative tone is set, the ensuing public and political debates depict refugees and migrants as invaders who need to be stopped, contained and combatted. The media that generated this public opinion has therefore succeeded in framing migrants and refugees in a certain way, and has thus set the social and political agenda.

The vuvuzela of the media currently broadcasts the message that immigrants and refugees are threatening the resilience of European societies, as well as the continent’s fragile national economies and security. The argument about security is used, in particular, to convince European citizens that terrorism is connected to immigration. And it is working. Huge gains are being made by right-wing political parties across Europe, with some winning elections and forming governments that promise to eject and reject refugees and migrants.

A growing list of European countries are governed by politicians who campaigned on the implicit or explicit promise that they would stop migration when they came to power. In 2015 Poland elected a hard-right government, while the following year saw the United Kingdom leave the European Union, a vote driven in large part by rhetoric around the topic of migration. This was then followed by the election of populist rightwing governments in Austria and Italy, as well as Hungary’s re-election of Viktor Orbán’s Fidesz party in 2018. And one by one, these electoral victories have been followed by the enacting of policies designed to make the lives of migrants and asylum seekers unbearable.

Ideally, we’d like to view broadcast media as an important tool for managing society’s increasing diversity and promoting inclusion. But so far it has proved woefully inadequate at performing that role, especially in Europe. Instead Europe’s press has chosen to play a central role in framing the refugees and migrants arriving on the shores of Europe as a tsunami-like crisis. This negative reporting has contributed to hostile attitudes amongst European citizens towards refugees and migrants.

Until the lion learns how to write, every story will glorify the hunter.

Sadly, things are getting worse, not better. The few organisations that support refugees are getting fatigued or frustrated, or they are losing support as governments become more hostile to refugees and migrants. It seems as if there is no way back, and turning back the tide of negativity seems almost impossible. We cannot simply rely on some faint hope that the media will start reinventing the frame they have built themselves- a frame which, as we have already discussed, borders a picture of a dangerous invading army. Instead, migrants must begin creating new frames and new pictures that tell their own stories from their own perspectives. As the old adage goes: Until the lion learns how to write, every story will glorify the hunter.

At the start of July 2022 I was invited to Madrid, together with around 60 other people from different parts of the world, to be part of the Decolonising the Newsroom programme coordinated by ZEMOS98 and Conscience Afro. Through these gatherings of like-minded people, I came to understand that all is not lost. We have a way out. We can help change the negative narrative by emphasising the positive aspects and added value that refugees and migrants bring with them.

We all agreed that, when the media take low blows at us, we will aim high. We discussed concrete strategies to reframe the negative narrative. If traditional mainstream European broadcast media can decide to portray a positive image of refugees from Ukraine and convince their citizens to accept them with open arms, we can do the same by using ‘new’ media, which is cheaper and without boundaries, to rebalance the algorithm from negative to positive. The more we amplify positive messages and the success stories of migrants and refugees, the more we will automatically redirect the algorithms to a positive narrative.

Let’s take Ukraine as an example. The dominant media made us all believe that we had a moral obligation to open our borders to Ukrainian refugees, to give them a place to stay on arrival, to give them houses and to accept them into our communities. This sudden burst of generosity was not only because these displaced people were running away from Vladimir Putin, however- it’s hard to overlook the fact that, despite being refugees, they look like the majority of us. By ‘us’, I mean caucasian, often with blonde hair and blue eyes. Sharing this personal story with you might help you to understand how some of us who do not look like the majority of Europeans have absorbed this media narrative into our very being.

When I came back from Madrid, I noticed something had changed in my neighbourhood in Utrecht. There was probably something published in a local newspaper about the arrival of Ukrainian refugees, that I had missed. Not a single online medium or TV station had alerted me to this either. When I arrived home, I saw a cruise ship and suddenly there were a lot of people walking around in my neighbourhood. My mind immediately went to thoughts of tourists and not refugees. Why? Because I did not see refugees as white people.

Challenging assumptions: Anyone can be a refugee

My assumption that the cruise ship next to my house in Utrecht was bearing tourists turned out to be a supposition that I should never have made, particularly given my own history of displacement. In the 1990s I had escaped war-torn Sierra Leone, and apparently I, too, was trapped in the mindset of believing that only people who look like me can be refugees. I had also read in the newspaper that the government was housing refugees on boats, but I hadn’t imagined that those boats were luxury cruise ships. Sometime in the future, I dream of travelling around the world on a cruise ship, and it was unthinkable for me that refugees might be staying on this luxurious liner.

I was disappointed in myself when I found out the truth, not because my new neighbours are refugees but because I had unconsciously participated in the negative stereotype of what a refugee looks like. What I learned is that anyone can be a refugee. It doesn’t matter the colour of your skin or how rich you are. War can turn anyone into a refugee.

I took my daily evening walk along the bank where the cruise ship was moored but saw nothing to indicate that 200 vulnerable refugees were staying there and in need of protection. This contrasts starkly with the regular asylum seekers’ centres, where there are security or police posted at the entrance, as well as visible protests from local residents and the permanent presence of police. That was not the case with this group. They seemed to be very okay. There were no protests around the site.

Changing the frame to gold

It all has to do with visuals. I started to think of the reasons why these refugees were not getting the same treatment as black or Asian arrivals might in the same circumstances. I did not hear any complaints about nuisance stemming from this group of refugees. They were not being treated as troublemakers. Was it because there was no one reporting to the police? Perhaps, I wondered, it was because in this neighbourhood the white Dutch residents are in the minority.

The majority of the people living nearby are Moroccan and Turkish, and they have other things on their minds than complaining about people who have fled their homes. Actually, I don’t hear them complaining about anything. Even when I turn my music up loud, no one comes to tell me to turn it down. Unlike in my previous neighbourhood, I don’t hear any complaints about the smells of my “exotic” African dishes. I get along just fine in this neighbourhood, though I’m not sure the municipality, police and developers agree.

Apart from their white skin, what also makes this new group of refugees different from others is that they are mainly women, children and older men who are more vulnerable. This makes sense: the young men are on the frontlines, fighting to defend their country from an invading Russian force and to allow my new neighbours to return home and live in freedom. When I see my new neighbours walking, I think of the loss of their husbands, their sons, brothers, uncles and cousins. They may live on a luxury cruise ship, but I wouldn’t trade places with them for all the gold in the world.

Framing is an important part of communication. When Europeans visit Africa and Asia, they present themselves as expats; people with expertise who have come to share their knowledge and resources with local people. We all know that that is not always the case, and that often they come to take knowledge and natural resources away from those countries. Meanwhile it is not the same framing when people from Africa and Asia come to Europe. They are called migrants or refugees. They are referred to as people who deserve pity, people who need help, or an invading army who should be feared and ejected.

Working together to change this negative narrative will help to change the frame from ash and toilet paper to a golden frame that can occupy a place of pride alongside the other frames on Europe’s mantelpiece.

Babah Tarawally (Sierra Leone/The Netherlands) is a writer, a columnist for the Dutch daily Trouw, and a trainer.

This article has been written within the framework of the Reframing Migrants in the European Union project co-funded by the EU, led by the European Cultural Foundation, in partnership with five other European partners.