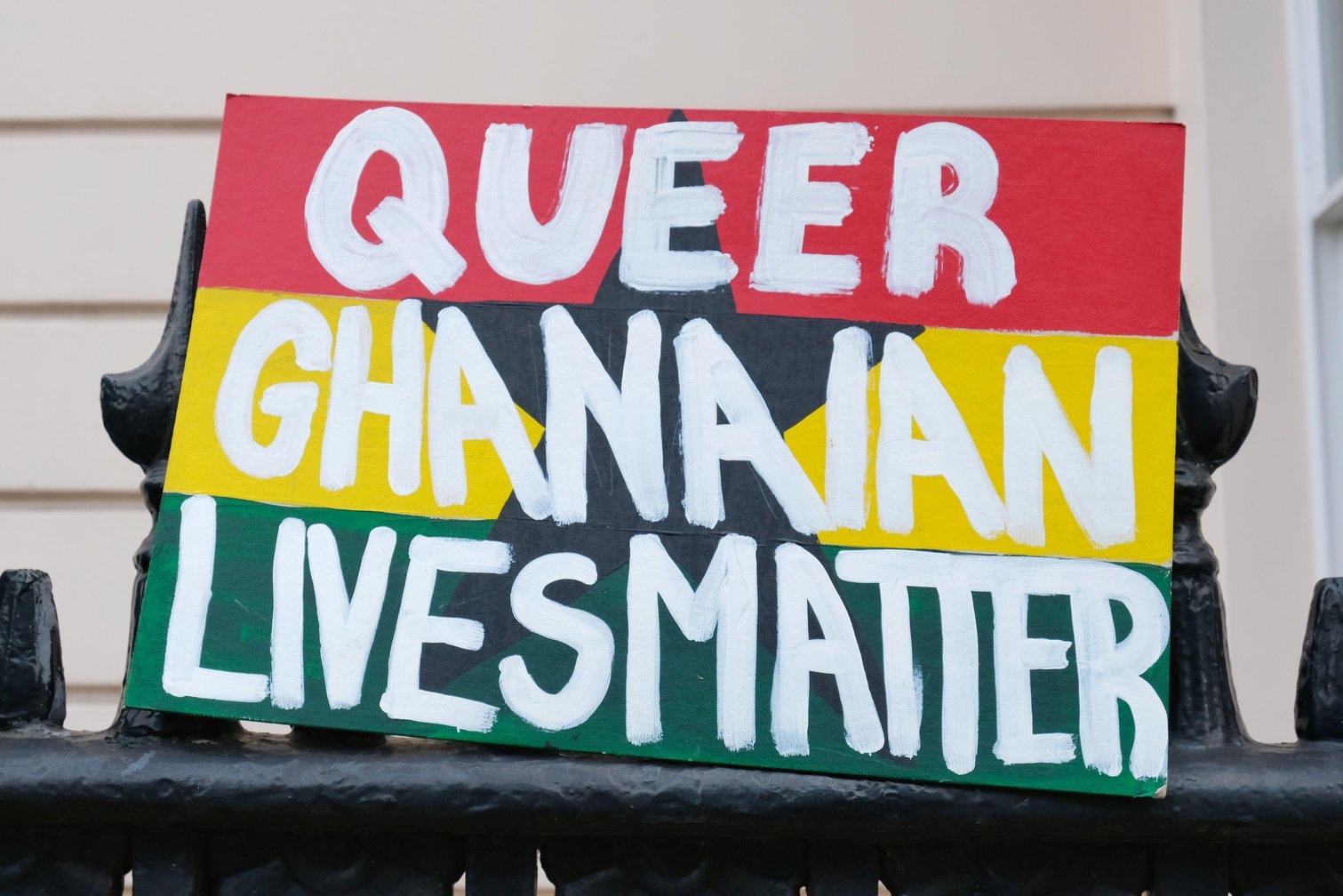 Ghanaian journalists are driving an anti-LGBTIQ campaign that could result in one of the world’s harshest homophobic laws.

When Ako* heard that an LGBTIQ community centre was going to open in the Ghanaian capital, Accra, the first thing she did was get herself a date. And then matching outfits.Calling an Uber on the day of the opening, she entered the words ‘LGBT community centre’ – and there it was. In a city of grand mosques and megachurches, there was a tiny point on the map that she felt recognised that she exists and deserves care. Attending the opening event made her feel as high as she has ever felt. “For the first time, I didn’t have to pretend about who I am,” she said.

But a couple of days later, friends were frantically calling and texting. Was she safe? Her picture had been on TV. Someone said they had seen a poster in her neighbourhood castigating gay people. Did she need them to come over and escort her when she needed to leave the apartment? She called her father, who was already aware that she was queer, to warn him in case something happened to her.

Foreign diplomats who attended the opening ceremony had shared pictures on social media. Ghanaian media had picked them up. And now her face, mercifully half-covered by a mask, was showing up on TV stations, in broadcasts that expressed shock and outrage that LGBTIQ people existed in Ghana and that they had opened a centre through which to support each other.

The journalists in question, along with other anti-LGBTIQ campaigners, called for the closing of this centre. Eventually, police raided it and shut it down. Ako recounts this story a year later, in late February 2022, at a small gathering for LGBTIQ people on a humid Accra evening. One of those present described how there has been “a whole year of hate and violence, especially on the airwaves”, since the incident. That same February evening, in another part of the capital, someone else was celebrating their role in that media storm.

Isaac Boamah Darko is the head of a local group that calls itself Journalists Against LGBT. He told weekly newspaper The Continent that he believes that homosexuality is sinful and “un-African“. One of the most prominent media figures in the campaign against Ghana’s queer community, he went on a media blitz after the Accra LGBTIQ centre opened, appearing on a host of local TV stations.

While Ako was remembering “a whole year of hate and violence“, Darko commemorated his moments in the national spotlight with glossy pictures in a WhatsApp Reel captioned: “A year today”. He had been preparing for just such a moment. He claims that his Journalists Against LGBT group boasts some 300 members, and he is also president of the Pentecost Media Guild, a national association of media workers who are evangelical Christians. The journalists, Darko told The Continent, “periodically meet and organise sensitisation workshops for members”, to remind each other that “the Christ-likeness in us should be shown in our day-to-day activities”, including in their radio, television and print work.

For the first time, I didn’t have to pretend who I am

Affail Monney, president of the Ghana Journalists Association, said that a lot of journalists in broadcast media have taken explicitly anti-gay positions. He acknowledged that stories on local stations were “so slanted”, and said: “There have not been any attempts to sanction journalists who have openly declared their stance against LGBTIQ people.” The Journalist Association’s code of ethics forbids journalists from producing any “material that has the potential to lead to hatred, ridicule or discrimination on the grounds of a person’s age, education, religion, gender, ethnicity, colour, creed, legal status, disability, marital status or sexual orientation”. The country’s laws are not so progressive: sex between men is illegal in Ghana, under a 1960 law.

Darko is also a member of ‘the Coalition’ – an informal name for the National Coalition for Proper Human Sexual Rights and Family Values, one of the country’s foremost organised groups of anti-gay campaigners. In 2019, the year that Darko joined, the Coalition partnered with one of the biggest networks of ultra-conservative campaigners in the Western world: the World Congress of Families. Together, they hosted a conference in Accra at which delegates spent considerable time denigrating LGBTIQ people and calling on each other to declare Ghana “a no-go area for the LGBT agenda”. Darko said that he was introduced to the Coalition through his church. He then corrected himself, however, adding “As a journalist, I don’t need anyone to introduce me to anything. I do my own research.”

The World Congress of Families was founded by US religious conservatives and right-wing Russians in the 1990s. It focuses on the sexuality and reproductive health culture wars, highlighting issues such as same-sex relationships and marriage, as well as abortion, which it opposes under any circumstances. It’s a narrative underpinned by the idea that the only ‘proper’ families are those in the heterosexual Christian nuclear arrangement and that everyone should be compelled to form one of these. In a 2020 newsletter to members, three years after it had co-hosted a conference agenda in Malawi, the network boasted: “We successfully brought together lawmakers and provided guidance and research to help defeat a pro-abortion bill in Malawi.”

Delegates called on each other to declare Ghana ‘a no-go area for the LGBT agenda.

openDemocracy commissioned local researchers to see how widespread misinformation had been in Ghana in the past year. They logged 138 instances of reports and posts that they deemed misleading, wrong or hate-inciting. These instances are only a sample of what is available online, however, and did not include offline broadcasts or print content. About 44% of the instances that the researchers logged were published by Ghanaian news sites, which are regulated, unlike individual social media users.

Facing such an onslaught of misinformation, Accra’s small LGBTIQ community was outgunned. The response to the opening of the LGBTIQ community centre culminated in a proposed anti-LGBTIQ bill that is so far-reaching that Human Rights Watch has said it “beggars belief”. If passed into law, it would require anyone who knows an LGBTIQ person to report them to the police. Identifying as LGBTIQ would attract a three- to five-year prison sentence and people may be compelled to undergo so-called ‘conversion therapy’. Any act considered to promote gay rights would land you with a six- to ten-year sentence. Parents of intersex children would have the legal right to subject them to so-called ‘corrective surgery’.

Journalism as a weapon of hate

Darko’s campaigning has been relentless, and has even appeared to endorse violence. For example, in April 2021, he called a local radio station to say: “We will expose and show where the gays and lesbians live; 98% of Ghanaians are against it and if Ghanaians want to beat them, so be it.” Speaking to openDemocracy, he said that he, along with other members of the Journalists Against LGBT group, moves “from community to community, especially in Accra, educating them about Ghanaian proper family values so that they will accept that our forefathers, our mothers, toiled for this land, and they didn’t practice homosexuality”.

However, some scholars argue that many African societies were not prescriptive about gender and sexuality until Christianity and colonialism arrived. Mohammed Elnaiem, a PhD candidate in sociology at the University of Cambridge, says that “it is not homosexuality and trans identities that are a colonial import into Africa, but homophobia and transphobia instead”.

We will expose where the gays and lesbians live… if Ghanaians want to beat them, so be it.

In Ghana, where journalists are often tightly regulated, it’s not unheard of for authorities to firmly tackle what they see as misinformation. On 10 February 2022, for instance, Accra FM radio presenter Kwabena Bobie Ansah was charged with “publication of false news and offensive conduct” after he made allegations about the country’s first lady, Rebecca Akufo-Addo. Asked about regulating anti-LGBTI misinformation however, Yaw Boadu-Ayeboafu, head of the National Media Commission, said: “We advise people to tone down,” but added: “At the end of the day LGBTIQ is unlawful in Ghana.” He added: “No journalist has ever been neutral.” Boadu-Ayeboafu suggested that journalists should provide a remedy for slanted reports by declaring their anti-LGBTIQ stance. “You cannot deny them if that’s the position they want to take, except that you advise that people who listen to them must not take whatever they hear as the truth because they have taken a position on the matter.”

LGBTIQ and human rights activists disagree. They say that people too often take what journalists say as the truth, and that these misleading and false reports can incite real violence. In a December case that is still in court, a Dogomba chief in Borla Top, near Timber Market in Accra, allegedly instructed seven men to attack three women he pronounced as engaging in lesbian behaviour.

The state prosecutor reportedly said the men gang-raped the women. Only two of the seven were arrested: they pleaded not guilty in court where they were reportedly charged with conspiracy, assault, robbery and abetment of crime. In October, in Tamale, the main city in northern Ghana, residents rounded up four men for allegedly being gay, and beat them up before presenting them to a local chief who had them sent to the police and on to jail. The ‘homosexuality’ case against them was dismissed in February but their assault by the vigilantes was not probed.

So far, Ghana’s regulators and law enforcement authorities have failed to take any action against the journalists spreading disinformation. Alex Kofi Donkor, director of LGBT+ Rights Ghana, the organisation which opened the now-shuttered community centre, said that the multilateral international community needs to “call out” and “caution” the West African country about its obligations to all its citizens. “Ghana is part of UN and other bilateral and multilateral treaties and engagements that clearly demand non-discrimination. It needs to treat all its citizens as equals, which isn’t happening in this present moment, especially with LGBTQ persons,” he said.

*Name has been changed to protect the individual’s identity

Based in Kampala, Uganda, Lydia Namubiru is Africa editor for openDemocracy’s 50.50 team. An investigative and data journalist and editor, she is particularly interested in African feminist movement building and the continent’s ebbing democracy. She has worked as a freelance editor, reporter, data consultant and documentary producer for a variety of news organisations in Africa and internationally, including Al Jazeera, the BBC, The Continent, The New York Times, Quartz Africa and Reuters.

This article was first published by openDemocracy.net