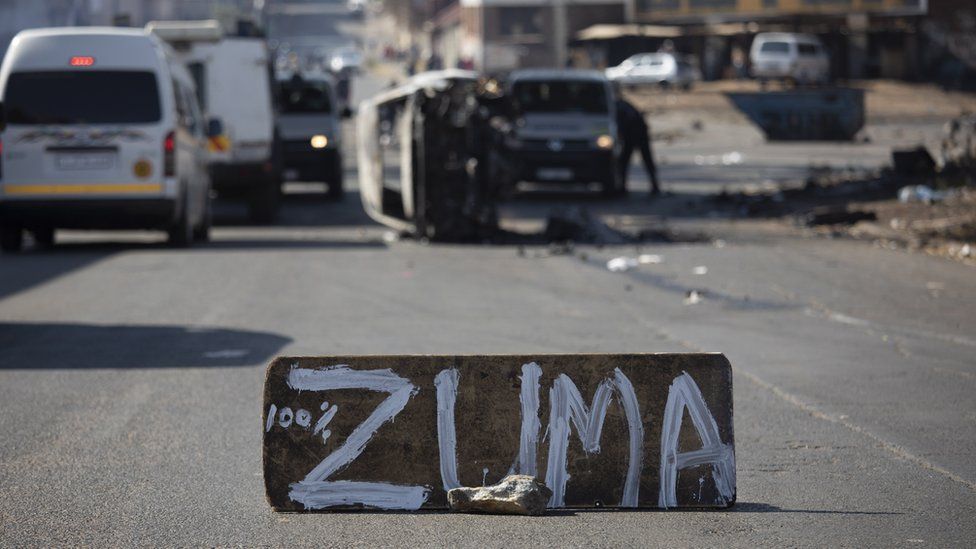 There was, once, an investment, south of Durban in KwaZulu Natal, South Africa. A local factory wanted to produce soap and perfumes. Normally, they would be looking to recruit some workers from the townships in the area, but this time it was different. Some men with knives and spears said they were workers, but also they said they were the neighbourhood committee. They were the people. And they wanted the people’s share of the project.

Then there was another committee. And another one. Among the men who wanted a share, there were few to none who knew how to do a construction project. Some of them did a little wall once – it crumbled as soon as they left. It had never been about the wall.

The factory never opened a branch in the area.

This happened all over the province of KwaZulu Natal, President Zuma’s home province, and it started to happen everywhere during his reign. Construction projects for schools, shopping malls, bridges, were with increasing regularity visited by men with weapons, sometimes guns, who needed a share. Many of such projects crumbled after having been extorted to pieces. By 2019, 25 billion rand — close to two billion dollars — was lost. Big construction companies went bankrupt.1

The destruction happened on municipal level too. Water wells and water pipes were routinely damaged at night, after which councillors would bring in water tanks they personally owned, selling water to their communities. At provincial level, money coffers were emptied for contracts to friendly ‘tenderpreneurs’, who promised to bring in equipment and protective clothing for hospitals, then didn’t, or only brought in very little.

With public money looted, practically none was left to spend on any matters of public interest. The Free State, a province run by Ace Magashule, Zuma’s trusted associate and until recently the Secretary General of the ruling African National Congress, hardly has a street not covered in potholes and garbage. Criminals do what they do in the absence of street lights. No one can run a market stall or a creche without thugs — often police themselves, for the difference nowadays is hard to see- coming to demand their share.

Under President Zuma’s reign, looting and criminality became the main business model in and around the South African state and ruling party. Not for the common citizen, that is. A citizen can still be beaten up and arrested for not wearing a COVID mask or drinking a beer outside, as happened to Collins Khosa (2) in Alexandra township last year. To break the rules with impunity you have to be part of the patronage system, whereby Number One allows you to do your little scams as long as you help him do his big ones. The ruling party, the ANC, knows this well. In the ANC, nowadays, branch members shoot one another for positions in the syndicate.3

I was thinking all of this when I saw Zuma supporters loot and burn Durban, Johannesburg and other places. ‘Free Zuma!’ is the rallying cry now that the kleptocrat president has been jailed for contempt of court after repeatedly refusing to testify to the anti-corruption commission under Judge Zondo.

It took me a few days to understand why people would take to the streets to fight for Zuma. What has Zuma done for anyone? 49 Billion Rand (4) — over three and a half billion in US dollars- disappeared from state coffers, mostly to Dubai via the former president’s friendly money-men the Guptas. Hardly a school or clinic in the poor areas of the country is fully functional. Unemployment is through the roof. Crime and violence are rampant. Why set fire to a working man’s truck, taking away his living, his bread, because the Number One who presided over this is jailed? That truck driver is black. Practically all victims of last weeks’ rampage are black.

Then I realised it. If you imprison Number One, Number Two may follow. And the lower numbers after that. The kleptocrat monarchy, with daughter Duduzile, nicknamed ‘Ivanka’, Zuma and her twin Duduzane, the would-be next president in his Gucci suits, are edging them on. We see you, we are you, tweets Ivanka from her luxurious home, sending out (remarkably often fake) pictures of fire and mayhem and clenched fists. Fight on.

Keep us, and we’ll keep you.

The men with spears and threats, who live off terrorising their own, need their capo. The clearest example of who and what they are is the extortion racket mounted by ‘protestors’ in Nkandla (5), a day after the riots started: now members of Zuma’s own rural village must pay ‘tax’ to men with weapons if they want to walk on their own roads.

There will be some who are just there because they suffer. Some who are simply hungry, simply desperate, thinking this is for blacks, this is for Zulus, let’s see if I can get some furniture from a shop, because that is what RET means. Radical Economic Transformation, as Zuma and his ANC called it. RET means just take what you can if you can. At the top, it’s contracts. At the bottom, it ‘s tax for crossing the road.

Kleptocracies all over Africa are run by patronage syndicates where you steal what you can if you manage to find a big boss who allows you. The game has different names: favour, nepotism, incompetence — there has to be incompetence, since the system has no place for those whose passion is for doing a good job (6) — the law of the strongest. The strongest is the one who dishes out the favours. In the words of the President of the Nigerian Academy of Science, Oyewale Tomori (7): ‘Competence is (…) not part of the criteria for those looking for a position in politics. It is “who you know”. To succeed, you need a “Godfather” and when you are successful you, too, become a Godfather’.

Zuma was once called a criminal to his face.

Zuma was once called a criminal to his face. ‘He is a fucker like us,’ a Western Cape crime boss said in his presence, and he and his allies laughed (8).

The Godfathers don’t want a public service, a police or a judiciary that works, because they must rule and they must have it all. Once, in Kinshasa, DRC, I asked a colleague why, even in the rich areas of the capital, the roads had elephant-sized potholes in them. Didn’t the rich care even for their own streets? He laughed and said ‘they don’t even live here. They spend most of their time on the French Riviera’.

It is for the Godfathers’ good life that the public service, the state and the rule of law must be broken. It is why good civil servants have been hounded out, from Ghana to Mozambique and from Congo to South Africa. It is why the Zuma-ites hate Cyril Ramaphosa, the post-Zuma president who has hesitantly started to say that he will only appoint competent officials to the state and that the judiciary must be respected, the president who has not interfered with the court order to jail Number One. It is why they hate ‘clever blacks’ as Zuma disparagingly has called them: the ones who stand with Judge Zondo, the Constitutional Court, the free media, and indeed the values and principles of the ANC itself.

The betrayal of the ANC

It is the ANC’s principles and values, now embodied in the South African Constitution, that have been betrayed by Zuma and his followers. The movement, founded in 1912, for many decades fought a brave fight for anti-racism, anti-ethnicism, human rights, justice, equality and democracy. It fought colonialism, apartheid and the rule of the white man on the basis of these principles.

It is therefore not true, as white former opposition leader Helen Zille wrote recently (9), that the uprisers of this and last week are simply ‘not ready’ for a constitutional democracy; that they are still tribal, simple people, who love Zuma, since Zuma is their chief. In writing this, she does a great injustice to these very ‘simple people’: villagers, I think she means, citizens who want water in their villages, roads, transport, school for their children. A functioning clinic. For over a hundred years now, such ‘simple people’ have considered the ANC as the movement that promised them those things.

That the ANC turned into a criminal syndicate under the rule of someone who convinced his followers that there were crumbs to be had, if they became like him, and that they had a better chance of benefiting if they were Zulus like him, is not these citizens’ fault. That under his reign the ANC betrayed all its principles as well as its promise of building a developmental state and turned to hysterical rallying around thieves, is not their fault. It is not the fault of those who starve under a broken state, even if some of them now hope to get some maize meal from a looted Spar.

It is most certainly the fault of those who did not timeously see the criminalisation of the country and the ANC; who continued to call for unity and stroked Number One’s head, made nice with the Free State Gangster, Ace Magashule, and abandoned the good civil servants when they were kicked out in their hundreds. Who allowed looting and corruption in the state under their command because some of their own allies were benefiting too. They are reaping what they sowed. Now, the very state they preside over, and its institutions, are weakened to such an extent that it is close to powerless to handle the current mayhem.

There was to be a turning point and it is now.

There was to be a turning point and it is now. South Africa’s current leaders did the right thing. They respected the Constitution. They fired the Free State Godfather (10). They jailed Zuma. Now they have to stop the extortion rackets and their cannon fodder in the streets, turn away from patronage, restore water pipes and clinics and build up again.

For the first time, a constitutional state in Africa has the opportunity to start squashing kleptocracy. It will be terrible if it fails.