How internet shutdowns have become the new normal 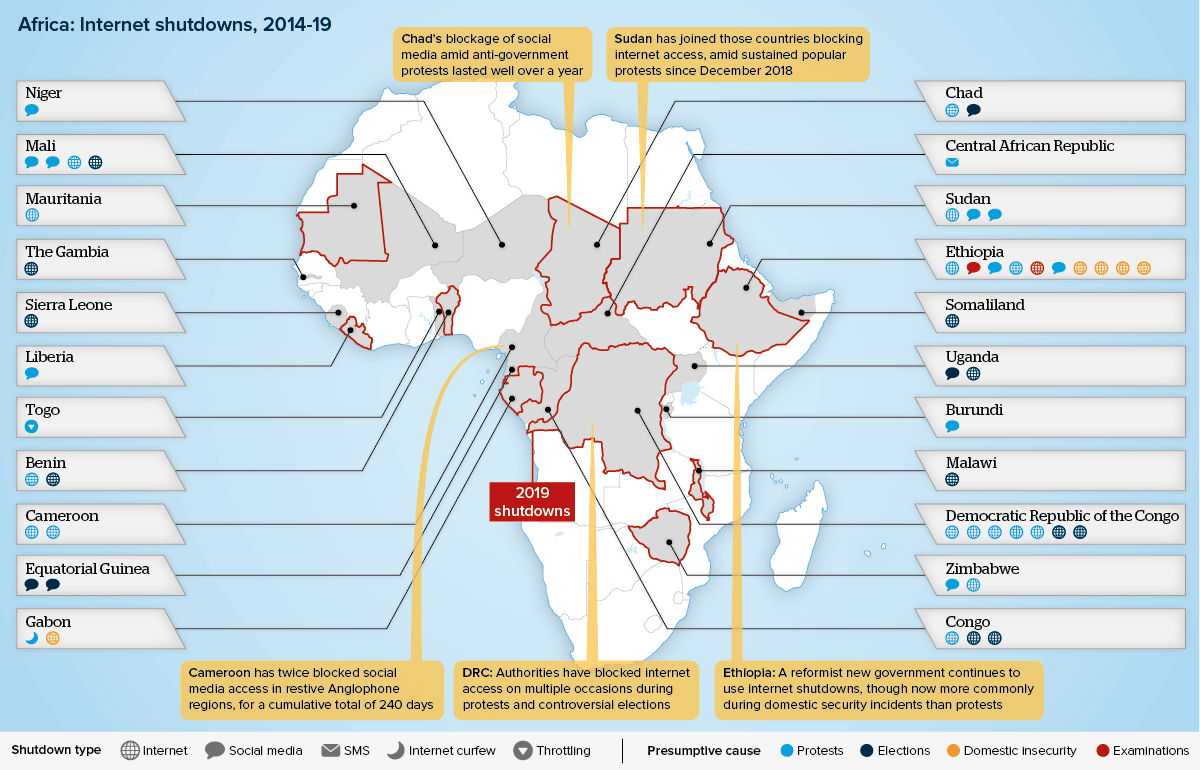 How Africa’s ‘new breed’ leaders have become the masters of information warfare.

With weeks to go until the Ugandan presidential election on January 14, 2021, Ugandan readers of The Elephant, an online platform published in Nairobi, Kenya, suddenly could not access its site. Typically, at first, they presumed, the site was down, or was experiencing some normal malfunctions associated with the heavy use of such a platform. So, they really were not duly concerned, they knew the site managers would no sooner fix the problem. But after a week, or so, word started filtering out from Kampala to Nairobi, that The Elephant site had been hacked and interfered with, and the worst thought was that the Ugandan government had shut down the website. Indeed, it had precisely done that. The publisher John Githongo had to explain to the Ugandan readers, on January 14, 2021, why they were experiencing difficulties accessing the site.

“For about a month now, some of our readers within Uganda have been reporting problems accessing the website. Following receipt of these reports, we launched investigations which have established that The Elephant has been blocked by some, though not all, internet service providers in the country. We have further ascertained that the directive to do so came from the Uganda Communication Commission (UCC) and was implemented beginning 12 December, 2020, when we noticed a sudden traffic drop coming from several providers in Uganda, including Africell and Airtel. We have written to the UCC requesting a reason for the blocking, but we are yet to receive a response.”

Yoweri Kaguta Museveni, who was inaugurated on May 12, 2021, in Kampala for his sixth record time, is setting a precedent, that of completely clamping down the entire communication system, that may as well be emulated by other African strongmen. Strongmen like President Museveni, who have no intentions whatsoever of abandoning state power, have come up with ingenious methods, every time they are faced with a general election, of winging the election into their favour.

One of the latest methods is temporarily shutting down the internet. “Museveni has gone a step further, Ugandans could not even use short message service (SMS),” said an Al Jazeera newsman who covered the election. “He also made sure that people with cross-country telecommunication roaming services could not use their mobile phones, hence blocking all forms of mobile telephony communication.”

President Museveni’s government resolve to temporarily bring down The Elephant platform was a tacit acknowledgment of two things: The Pan Africanist platform which also covers stories from Uganda, written by Ugandans, could be widely read in the country. Two, that the wonders of the Internet have allowed the platform, to be available to all corners of the country, therefore to anyone, so long as they have a smart phone and can afford some internet bundles.

Towards the end of 2019, I got a Twitter direct message from a Ugandan reader of The Elephant from Jinja town, who told me the publication had become his reliable source of well-analyzed information. When the platform begun writing stories on Uganda, the platform became a must read for him. He told me if there is one thing he uses his internet bundles for, is to download all the stories he wants to read from The Elephant, so as to read them offline later on.

Yoweri Museveni, it will be recalled, is an ageing East African leader, who in the mid-1990s was part of a group of leaders who were referred to as the “New Breed”. The others were Paul Kagame of Rwanda and Meles Zenawi of Ethiopia. Kagame was then the Vice President and Minister of Defense. Zenawi was until his death in 2012, the Prime Minister. One of the distinguishing characteristics of the “New Breed” leaders was their capacity to control and channel communication effectively to their advantage. So, even as early as in the 1990s, leaders like President Museveni already understood the importance of managing and manipulating information as a way of keeping a stranglehold on state power. In a candid interview, in 1995, one of these “New Breed” leaders told a foreign correspondent that “the handling of information was about the survival of my country”. He could as well have said: it is about my survival to hold onto absolute power.

The influence of the Internet and information communication technology was just beginning to be felt in Africa and savvy political leaders like Kagame and Museveni were alive to the fact that it is the leader who controlled these communication advances that would stay at the apex of power. In essence, they mastered the art of information warfare. Is it any less surprising that the trio become the masters of shutting down the internet every time they are faced with presidential elections?

The latest president to shut down the internet during election time was Denis Sassou Nguesso of the Republic of Congo, which was prior to the March 21, 2021 presidential elections. In a continent that has one of the fastest penetrations of the internet worldwide, African rulers aware of the power of the internet in relaying news and mobilizing crowds, have quickly learned that the new weapon for controlling the flow of information and mass control is the shutting down the internet.

Lisa Garbe, an internet researcher who has done some work on internet shutdowns by the authoritarian regimes of Africa, has aptly noted that “internet shutdowns in African have become the new normal.” To be fair to African despots, it is not only them who have been conspiring to shut down the internet: Four months ago, in Myanmar, a military junta, one morning on February 1, 2021, woke up and overthrew the democratically elected government of state counsellor Aung San Suu Kyi. One of the first things it did, was to shut down the internet as a way of checking the flow of information and controlling crowd mobilization.

President Museveni’s chief opponent this time around was a young man – the 39-year-old Robert Kyagulanyi aka Bobi Wine, who was born four years before the 42-year-old Museveni captured state power in Kampala. Bobi considered a local boy, built his fame as a musician from the Kampala ghetto of Kyadondo, where he is the MP for Kyadondo East constituency. Because of being constantly harassed by Museveni’s security agencies, he could hardly hold political rallies. So, he resorted to investing heavily in social media, as a way of reaching his supporters.

Bringing the entire system down, Museveni wasn’t taking any chances.

But to Bobi’s (late) realization, he was using a campaign tool that was in complete control of his competitor. “Museveni was intent on shutting off Bobi from all information and communication relayed through the internet connectivity, from his legion of supporters: the tech-savvy millennial and Generation Z, whose use of social media is supposedly second nature to them,” said a foreign journalist who covered the election. Today, the millennial and Generation Z, constitute an upward of 65 percent of the total registered voters, hence, form the largest voting bloc in Uganda. “So even if it meant bringing the entire system altogether down, Museveni wasn’t taking any chances.”

In Uganda, as indeed in many African countries including the East African countries of Kenya, and Tanzania, the most popular social media apps that today frighten the political class, are Facebook, Twitter, WhatsApp, YouTube and Telegram, necessarily in that order. Kenyans on Twitter (KOT), a motley crew of ferocious countrymen, for example, rallied in protesting against the IMF lending any more money to the ruling Jubilee Party. Said Grant Brooke, a social economist in Kenya on his Twitter handle: “Kenyans on Facebook and Twitter rejecting IMF lending Kenya government’s more money is a fascinating sign of things to come in global finance. Government might not care, but IMF is certainly sensitive to bad PR.”

On the eve of Museveni’s swearing-in, angry Ugandans unleashed a swift pushback aimed at the German Embassy in Kampala, after it posted a congratulatory message from Angela Merkel to President Museveni. “Hello followers, we are getting a lot of criticisms for this post…that’s OK.” Hoping to calm down the online warriors, the embassy’s acknowledgement only helped to fuel more anger. At night when everyone was apparently asleep, the embassy deleted the Facebook message.

Without information, the few election observers that were allowed into the country, for example, could not collect and collate data on the electioneering process. “But more fundamentally, Museveni made it nearly impossible to report on the election by the assembled media houses – local and foreign,” Al Jazeera claimed. “The internet shutdown took the media houses 20 years back in time. If you didn’t have satellite capabilities you couldn’t operate. Internet shutdowns not only work against the regime’s political opponents, but are also meant to cripple media operations or make it very expensive and difficult to report on the election.” Today, many of the media houses have invested in social media tools that greatly eased their work and lessened their operational costs.

“Some of us who could afford, had to resort to B-Gan and satellite phones to transmit information back to our stations,” said the journalist. B-Gan which stands for Broadband Global Area Network, just like satellite today, is very expensive, few media houses can ill-afford to equip all their journalists with the gadgets.”

Authoritarian regimes in Africa may be perfecting the art of shutting down the internet as an advanced form of rigging the elections, but they are not without a helping hand: Suraya Dadoo, a South African journalist in Johannesburg writes about Circles, an Israel telecoms company, which mostly deals with government helps those government, “intercept data from 3G networks, allows the infiltrator to read messages, emails and listen in on phone calls as they occur.”