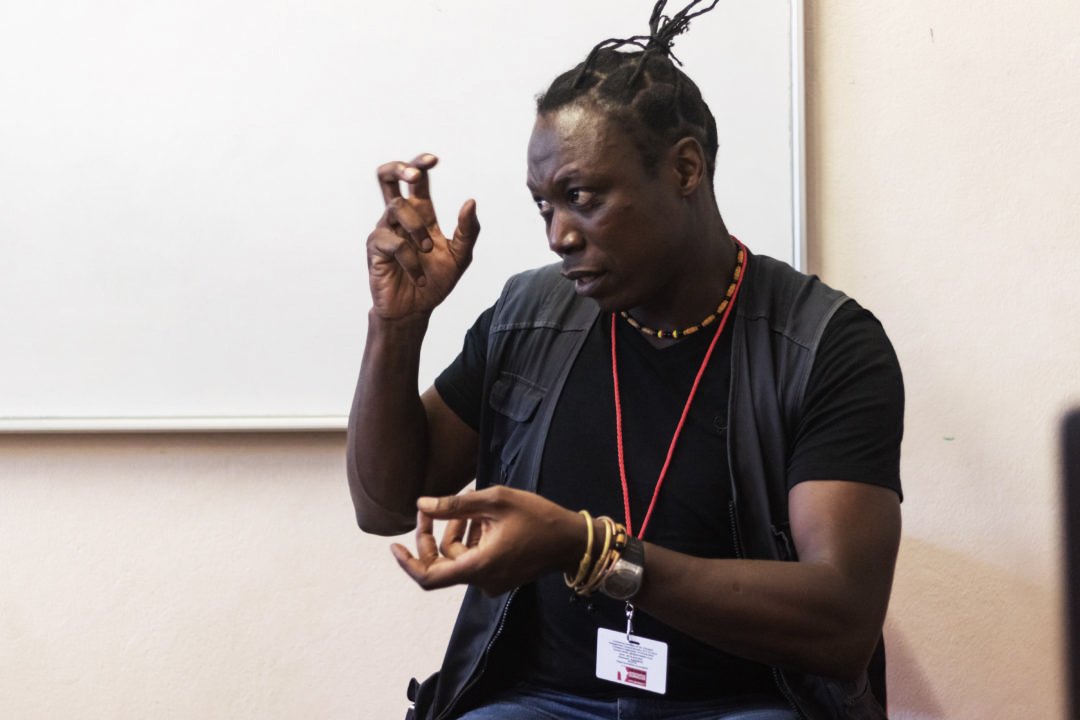 On Monday 17 December, 2018, our colleague Estacio Valoi and his team were arrested by the Mozambican army.

When investigative journalist Estacio Valoi, known for his reports on plunder of natural resources in northern Mozambique, went to report on the situation in conflict-ridden and desperately poor Chitolo village, he and his team found the road blocked by soldiers upon their return. What followed was a day and night of terror for the team of three -with Valoi were USA-based lecturer and Amnesty International researcher David Matsinhe and driver Girafe Saide Tufane- with multiple death threats and little food, whilst the military went through Valoi’s laptop, recordings and pictures.

Thanks to an alert by the African Investigative Publishing Collective, of which Valoi is a member, many friends and colleagues around the world -notably the Committee for the Protection of Journalists and the Southern African Media Institute MISA- rallied to get him released and the pressure resulted in their release the following day. But the nightmare seems far from over: even after their release a military vehicle with heavily armed men tried to get them to stop again after they were driving home and Valoi’s cameras are still confiscated. Even more worryingly, the content of laptops and phones has been searched, which endangers, besides Valoi, also his contacts and sources.

In a statement issued by the African Investigative Publishing Collective, of which Valoi is an executive member, the AIPC says that Valoi needs to be given space to finish his work in a safe place for him to collect his records as much as possible and finish his investigative work. It has called on the international press freedom and investigative journalism community and support organisations and individuals to assist with fundraising to make this possible.

Below are excerpts from a diary Valoi wrote about his two days of terror.

“You will die and no one will even know why”

On 16 December 2018 at 7 am we - myself, David Matsinhe and our driver - left Pemba for the Mocimboa da Praia District and Chitolo. David, who is a human rights investigator at Amnesty International was on annual leave. He had come to join us at the invitation of our Mozambique Investigative Journalism Centre CJIMOZ (Centre do Jornalismo Investigative de Moçambique). Once in Mocimboa, at 3pm in the afternoon, we found that the military personnel at the control station on the road to Chitolo demanded a ‘letter of authorisation’ from the police station in the district. The team then immediately contacted the Cabo Delgado provincial chief of police, Mr Sivi, to ask for such an authorisation. We explained that we were following up on work we did in the same village after it had been attacked by armed militia in July this year. Mr Sivi responded that he would consult with the Mocimboa district chief of police.

We then went directly to the district police station, where the deputy chief of police assured us that we were authorised to enter Chitolo. However, he said that this would only be possible the following day and we would have to spend the night in Mocimboa. We did this and on the following morning, the 17th December at 7.10, we went back to the district police station and obtained a stamp on the accreditation letter for our CJIMOZ Center. The district deputy chief of police suggested that we should go together with officials of the UN World Food Programme (WFP), who were on their way to Chitolo to distribute food.  We told the deputy chief that, indeed, we wanted to report on the poverty and food scarcity, but we could not wait for the WFP because we had a lot of work ahead. We were then allowed to enter the village, but found that soldiers accompanied us wherever we went, recording us as we were interviewing people.

After finishing, we left in the direction of Palma, but about 15 kilometers before reaching there we saw some movement on the road ahead of us. As we approached we saw it was there were about fifty soldiers, standing on the road with large calibre weapons, including AK-47s, aimed directly at our vehicle. They shouted at us to stop and get out of the car, adding that they had to ‘confiscate’ it. We showed them our authorisation. They said “The ones who gave you that authorisation are the same ones who want you back.”

By then the soldiers on the road were joined by more soldiers, including the district military commander, who had come behind us in a BTR armoured vehicle. On his arrival the commander ordered us to open the boot, from which he confiscated my cameras and laptop. When I asked why he did that, he responded with the same words: “The people who authorised you now want you back.”

I then called Mr Sivi, the provincial police commander, again. He told me that he was not aware of what was happening. We were now all sending messages and phoning our colleagues, until the military commander ordered his men to confiscate all our phones. David Matsinhe was forced to go with the military in their vehicle and we were told to drive slowly with them to their temporary headquarters at the Quelimane High School premises near the Mocímboa roundabout.

As we were being detained there, soldiers with guns pointed at us demanded the passwords of our telephones and computers. We tried to argue but soldiers, including one captain, simply said: “Here we take all your rights away. If you don’t do this we can do things another way.” Since executions of people in this area are said to be frequent, we obeyed. “They are very lucky to have this treatment,” commented one soldier. That night we only had three maca roots to eat and had to sleep in the back of our car, a Toyota 4 x 4. As a parting shot before bedtime, the same captain told me: “you will die and you will not know why.”

The next day, Tuesday, we continued to be detained and were constantly watched, even whilst going to the toilet or drinking the dirty water from the pump, which smelled of petrol. For breakfast, they had brought us bread, hot water, sugar and even some mangos, though: a kindness which surprised us. Was it to endear us to our interrogators? Because all the while we were being questioned. Where did our money comes from, who was funding our reporting? Was I part of a militia, was I Al Shabaab, why were the others ‘hanging out’ with ‘that guy,’ meaning me? Where we lived? Why one of my cellphones was now blocked and they had difficulty unlocking it?

We did get food, porridge with some meat, at 5,20 PM. Around 6:30 PM - it was already dark - a group of ten soldiers came to us saying “we have news for you. You can go now. Driver, here's the key. We treated you well, didn’t we? Go now.” I asked for our work equipment and about our material. I also asked how we were supposed to continue working now that they had violated all of our information and communications. “If you want, you can stay here for a few more days, until we finish working on your machines,” was the answer.

We feared that we might be driving into a trap and might get ambushed again, but there was no option but to leave. We were relieved when we noticed a civilian truck traveling in the same direction and we stuck very close to it, even travelled a bit in front of it, so that whoever was driving the truck would be a witness in case something was to happen to us. And indeed there was a disturbance: about five kilometers from the Mocímboa roundabout a BTR military vehicle with armed men signalled us from the roadside, flashing their lights and hooting at us to stop. Like hell we were going to stop!

We drove on with our truck to Macomia, where we were lucky to find a trader who sold us a cheap cell phone, and started phoning our contacts to tell them where we were and what happened. But when we saw soldiers marching in Macomia, too, we decided to leave again in a hurry, driving straight through to Pemba. Back home we turned on the laptops and saw that the military had indeed accessed all our emails.

Note: click here for the AIPC statement and for details on the fundraising campaign for a temporary safe getaway for Estacio Valoi.