Video | Central Africa's Kleptolands. How the rich get richer. 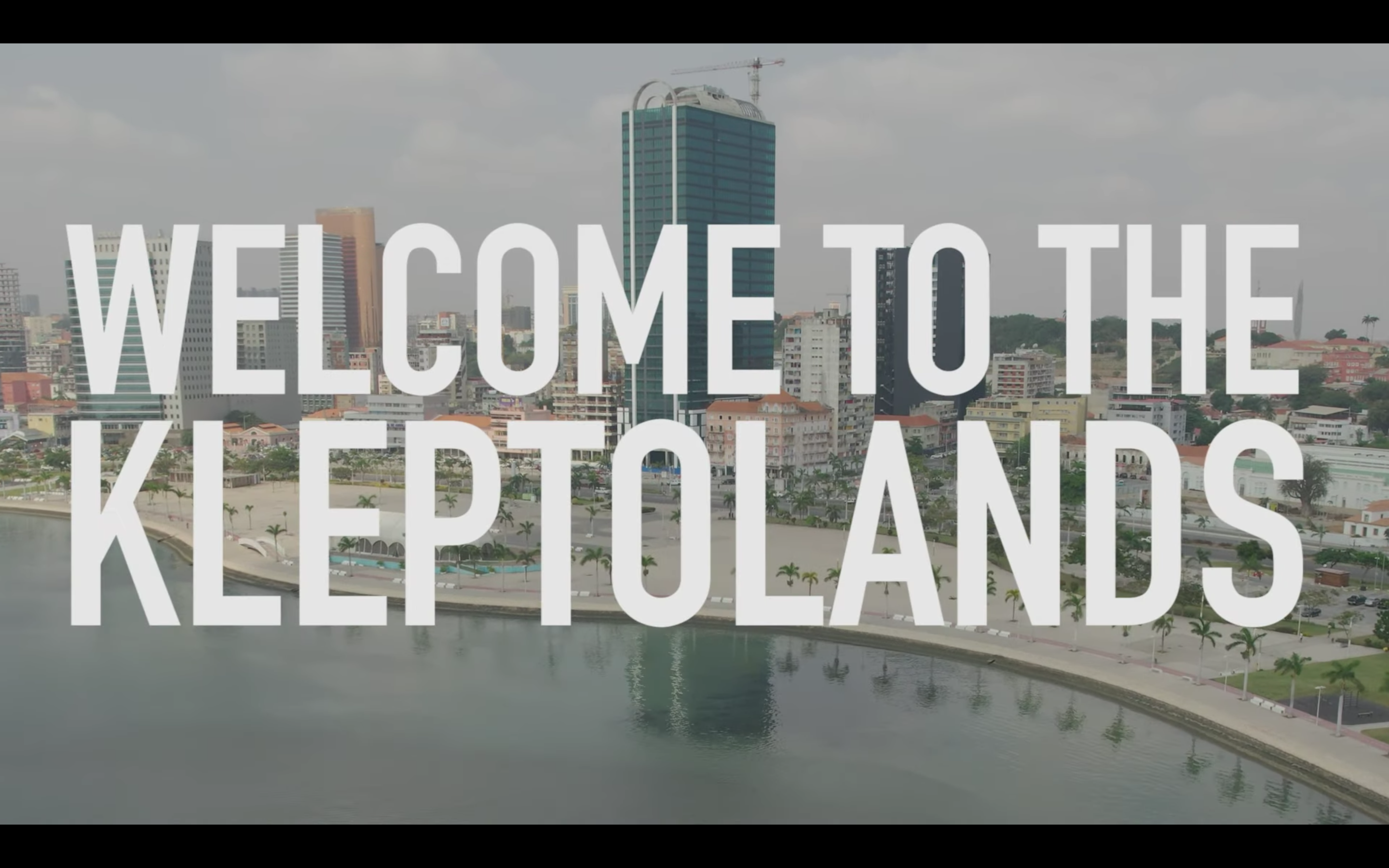 A new videoseries shows in five short episodes made by activists just how the plunder of their own countries by local leaders, thanks to (often less-than-ethical) trade relations with foreign companies and global kleptocracies, translates to international assets. Episode 1: Angola.

The struggle of a mother living in a Luandan slum is one that requires all her might, each day, just to keep her child alive.

With insufficient clean water, sanitation or electricity, virus-borne diseases like cholera are everyday realities from which there is no escaping.

Some 50% of Angolan children under five are anaemic, more than a third are estimated to be stunted, and nearly one-fifth are underweight, noted a World Bank blog* last year. This isn’t just a natural and inherent feature of life in Angola – it is the product of kleptocracy.

The cost of water

In theory, it is possible to buy water for a few dollars. But half of working age Angolans earn less than $1.90 a day. So a mother may choose to walk hours to a safer source to collect semi-drinkable water which she may or may not be able to boil that day.

But all of this effort, waking and sleeping with the word water in her mind, takes away from every other need such as getting a better job, caring for her child or even the simple act of resting.

And yet a few streets away, she will see towers of steel for the rich, supermarkets filled with food she cannot buy, cars that will reach their destination in a few minutes while she is condemned to walk.

Her life, with its finite hours, is consumed by the mundane and perilous struggle to stay alive.

Mansions in Florida, Dubai and Paris, access to Swiss banks, yachts off the French and Italian Riviera coastlines: all such wealth belongs not just to European, American or Russian oligarchs and other international mafia’s, but also to kleptocrat rulers of Central African countries like Cameroon, Chad, Congo, Angola and Equatorial Guinea. A new video project by the Anti-Kleptocracy Coalition of Central Africa shows in five short films made by activists just how the plunder of their own countries by local leaders, thanks to (often less-than-ethical) trade relations with foreign companies and global kleptocracies, translates to international assets. Of Angola’s billion-dollar oil exports, for example, literally nothing trickles down to the provision of water to its desperately poor citizens, writes Khadija Sharife. Her article accompanies the first activist video, on Angola, in the series.

The corruption that starts at the top

Grand corruption, the kind that starts at the top, is the reason why her child is born and may likely die of a preventable illness like diarrhoea, in a slum somewhere in Angola. Angola has one of the world’s highest child mortality rates and water-borne diarrhoeal pathogens is one of the main causes. Eight out of ten are communicable or preventable diseases.

Corruption has stolen something more important than survival: hope. Is not every human born with the moral obligation to live their life in the best possible way, to work hard and develop their talents and dreams? Hard work, we are told, will get you somewhere. But too many African citizens have no hope of hope.

The word “corruption” is so closely associated with Africa; a continent framed as having an incapacity for integrity, democracy and accountability.

The foreign lens of civil society, media and even donor governments have deepened this caricature by packaging African peoples as docile, dancing and only in need of a helping hand to develop them – whether donor aid or music videos; buildings and old shoes, computers and tins of fish.

Africa is not one dimensional

The flattening of reality to a one-dimensional story where Africans are childlike peoples governed by corrupt, often male, father figures, invokes and legitimises a set of problems that sit far from the reality. Solutions, like fair trade coffee, may be linked to problems that don’t fully ring true for the human, only the company that seeks a virtuous halo for their engagement.

The truth is those figures are installed and externally financed with the cash and weapons they need to maintain a forced control. And people are too exhausted from the act of survival to counter them.

Vertical corruption in Africa, the kind that starts at the top, is no different from European or the US, only there is less infrastructure to conceal it.

Some forms are heavily institutionalized, others are extra-legal and still some, like Black Economic Empowerment, favouring politically connected fixers with ties to a ruling party or regime, inhabit greyer areas.

In fact, Angola’s elites were so sophisticated at corruption that they even confounded the European Union when they created and owned their banks in Europe as a money laundering conduit. More importantly, the Angolan elites could not be reported to authorities easily because they controlled their bank’s own reporting process.

They even subsidised the shares of those private banks by state-owned oil entity Sonangol before gifting it to themselves, making hundreds of millions in free profit. Until 2020, the European Banking Authority had no mandate to investigate money laundering. Foreign politicians could own banks. The EU had failed to harmonise its anti-money laundering and terrorism laws until 2021.

The heart of the matter

This leads us to the heart of the problem: most forms of corruption are rooted in one thing — a financial model where foreign companies finance local actors for benefits mutually conferred. Most resource-rich countries perform as selective democracies because companies provide revenue to a rent-seeking regime that bends the rules as the regime and the company require.

Sonangol’s partners throughout the dictatorship of former president Jose Dos Santos were foreign oil companies, many of whose investment began during the civil war.

Citizens, who receive woeful service from the state in terms of education, employment and the opportunity to create formal economic activity, contribute much less to the public purse and are also deliberately marginalised so that their contribution is not critical.

This is not because the informal sector is without value, only that it must necessarily avoid the regime to avoid being double taxed —- because each day, they are informally taxed through horizontal corruption, the police officer or nurse who demands “cold drink money” to provide a service because they are, themselves, not paid decently if at all, or able to get more by abusing their small bureaucratic power which looms large for the average citizen.

The power of the vote

The power of the vote, if one exists, then becomes a marketplace where the regime barters a forced peace for less militarism and violence — weapons being one of the primary purchases adjacent to an elite lifestyle abroad.

Ironically, a country with less mineral resources, particularly oil and gas, will have a lesser tendency towards corruption than those with vast resources because the financial model is less profitable for foreign companies investing.

In fact, a long-term stable business relationship — the kind that occurs in the Republic of Congo, Angola, Chad, even Botswana, is one which sees a company invest in the kind of corrupted bendable leaders or parties that will not change for a long time. In short, their investment is safe.

But for citizens, especially those in countries with enclave economies — where oil or gas or even financial secrecy as in Mauritius hires a small number of people but dominates the economy — this investment actively neutralises and even cripples the momentum towards democracy which does not equal, but rather leads, to accountability.

What leaders fear the most are economies they cannot control: where teachers, lawyers, taxi drivers generate the kind of money that controls how responsive government is.

But that can never happen so long as international law allows for foreign companies to invest in authoritarian regimes for the purposes of taking more and more for less and less.

Corruption, the opposition of justice, is not an outcome or an act in solitary. It is a culture that infects a child with cholera, steals hours every day, and incentivises a foreign company to sink billions into a paradise of riches that is made empty for its own. And emptier each day.

Here are the introduction and the first three episodes of the videoseries.