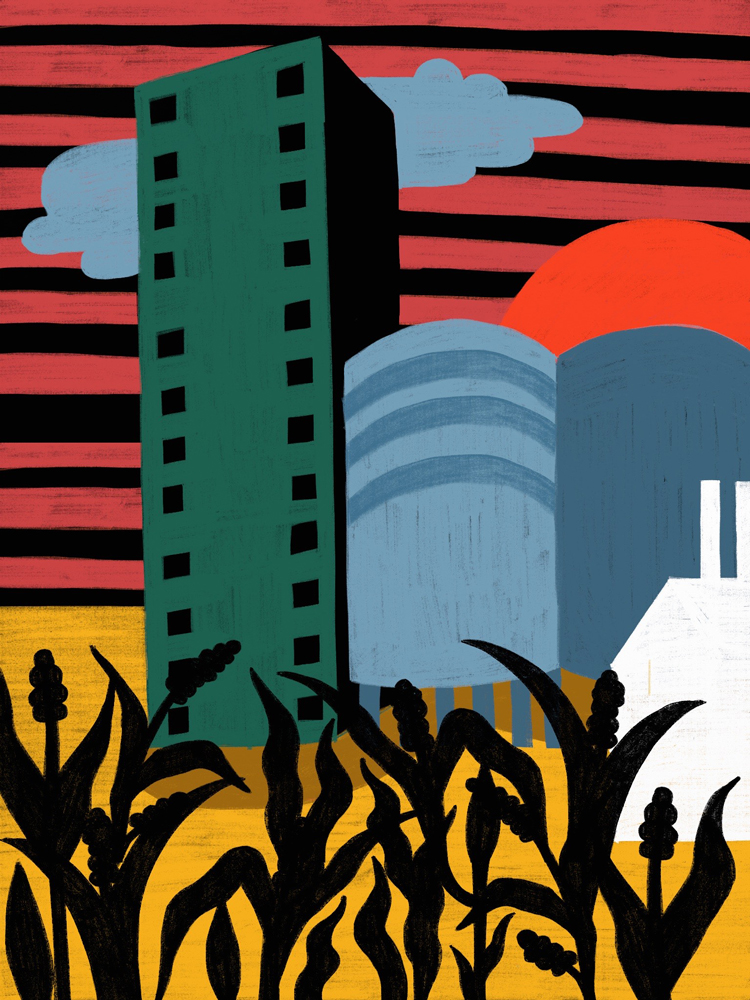 ‘I don’t know how much it is in Kwacha that we have to pay, but it is a lot, in thousands’, says Dickson Chishimba, leaning back on his chair and wiping his moustache after a sip of sweet beer, locally known as munkoyo. Thought it is lunchtime at his cooperative’s milling plant in Kalense, northern Zambia, the production of maize meal, a staple in the country where many do not have sufficient access to food, is ongoing today. But that may not continue to be the case for very long. The Zambia Cooperative Federation (ZCF), of which Chishimba’s plant is one, is asking the farmers on the cooperatives to pay huge loans back to China, which built the plants: way beyond what they can afford.

Interviews with farmers on thirteen cooperatives, recipients of the plants in the northern Zambian region, show that they are all in trouble when it comes to the repayments to the ZCF, which took on the project two years ago as a ‘launch-pad for rural industrialisation and economic growth’. Concerns about the massive loan and its much-feared payback arrangements were already raised at the time, but the ZCF pressed ahead, forcefully arguing its cooperatives into agreements and supplying the plants.

All thirteen surveyed cooperatives have defaulted.

‘Life was already hard here, but the plants have even made the situation worse. Most cooperatives are not making enough money to service the loan’, says Joseph Kampamba, the manager of Lwabwe cooperative, thirty kilometers from the region’s main town, Kasama. According to an agreement signed by one of the cooperatives, all recipients of this particular plant must pay the loan back to the ZCF in a monthly instalment of 1,700 Kwacha (US$ 77) over a fifteen-year period. So far, all thirteen surveyed cooperatives in Northern Province have defaulted, complaining that they don’t make enough money to repay the loan. The average monthly income for the cooperatives, with on average two workers, a miller and a security guard, is eight hundred Kwacha (US$ 36).

Several of the plants have also stopped working. Of the thirteen surveyed plants, four were non-functional due to several reasons, ranging from non-availability of spare parts to dysfunctional central control systems. At Lukulu South, west of Kasama, the plant had gone over a month without working when we visited.

Another problem has turned out to be the fact that they are solar powered. Whereas this was at first thought to be a good thing in the country where electricity is still not widely or continuously available, it has turned out to be a burden. At night and on cloudy days, and in the absence of power storage devices such as batteries, the milling plants do not function. ‘If there is no sunlight, we can’t operate because it is a direct energy thing’, says Bornface Ngoma, a plant operator at the Mkaka cooperative in Zambia’s Eastern Province.

The hammer mills sheltered in blue prefabricated buildings – totalling, according to the ZCF 1 683 plants in the entire country – began to emerge on the Zambian landscape in 2015. On its website Shandong Dejian Group Company Limited, the company that supplied the equipment and engineering works, even puts the number at over 2000. It boasts that the price of maize meal in the poor country has been slashed because of the project. It does not, however, say that it is selling the single solar-powered hammer mill units to Zambia at US$ 70 000 each, whereas, according to an emailed quotation from the company, such a unit, including shipping costs, only costs US$ 25 500 when it is bought directly. To make matters worse, the unit’s priced quotation also includes solar panels and storage batteries, while Zambia buys the units, at US$ 70 000 per unit, without these.

The ZCF has not explained why cooperatives, in terms of the loan from China, are repaying US$ 70 000 for each unit even without solar panels and storage batteries. Asked why it did not include batteries, ZCF director general James Chirwa told a local radio station last year that the batteries were more expensive than the equipment itself. When asked about the expensive unit costs Zambian farmers were now repaying, the ZCF’s director of projects, Derrick Sokoni, refused to comment. ‘Doing so would be like opening old wounds’, he said, adding that the issue was ‘a closed chapter’.

There have been many reports of overpriced procurement deals.

Suspicions abound that the farmers are paying back such huge sums because ruling party officials who facilitated the deal needed their slice. There have been many reports of overpriced procurement deals in this country, where a majority can’t always afford sufficient food, yet those with access to state money post videos showing off their cash and posh vehicles on social media.

In the case of roads, for example, according to economist Oliver Saasa, a lecturer of economics at the University of Zambia, the country is conducting construction projects that cost the country US$ 1 million per kilometre, way above the regional average of US$ 500 000. (Which is a threefold increase since 2017, when a study by the World Bank found that Zambia coughed up a whopping US$ 360 000 for each kilometre of road constructed, more than twice the regional average even then).

Similar massively expensive infrastructure, among which two renovated airports, two power plants, a stadium, a dam, a hospital, a railway, two communication towers and various housing projects, plus a number of small unspecified loans and programmes with lofty-sounding titles like ‘water and sanitation’ and ‘poverty reduction’, have in the past decade ballooned Zambia’s debt now – in an estimate by the World Bank – beyond 30 billion US$, most of it to China.1

And even if there is no question that Zambia needs roads, railways, hospitals and the like, the output of these projects and programmes, like in the case of the mills, often leaves much to be desired.

‘One of the biggest problems we have seen with a lot of these projects, is the accountability and transparency angle’, says director Maurice Nyambe of Transparency International Zambia. ‘We have seen (ruling party) Patriotic Front cadres, they’re the ones that always seem to get these projects’.

So many buildings by politicians and servants – where do they get the money?

The Zambian state’s Financial Intelligence Centre pointed out in its 2018 money laundering and terrorism financing report (2) that procurement corruption is ‘so vast that it has led to the crowding out of legitimate businesses and increased costs of public projects’. The FIC observed a trend where companies not registered with the Patents and Companies Registration Agency, PACRA, were awarded public contracts. ‘Most of these companies were connected to Politically Exposed Persons,’ says the report.

Anti-corruption investigations and protests have had success in a few cases, most notably with regard to the Lusaka-Ndola dual carriageway, which the government announced at a ceremony in September 2017. The fact that it was costed at a whopping US$1.2 billion for a 321 kilometre stretch evoked public concern to such an extent that the government was forced to ice the project (a review and revised cost estimate are still pending). However, other expensive projects, such as the Chinese maize milling plants, have gone ahead without a regard for protests.

Two court cases against high-profile leaders accused of corruption have likewise yielded little result. In one such case, in 2019, Minister of Infrastructure and Housing, Ronald Chitotela, the first high-profile official to face charges of corruption while serving in government, was accused of concealing property believed to be proceeds of crime. However, a few months after his arrest the Magistrates Court found Chitotela had no case to answer. He is now serving as Minister of Tourism and Arts. In the second case, Minister of Health Chitalu Chilufya, arrested by the ACC last year for being in possession of properties alleged to be proceeds of corruption, was acquitted in the same year.

Both ministers served – and in the case of Chitotela, serves – in the government headed by Edgar Lungu, who has been president of Zambia since 2014. It has been under Lungu that Zambia fully entered its debt crisis. In 2014, one year before he assumed power, Zambia’s payments to external lenders were at a level of four percent of government revenue. Now, in 2021, they are at an estimated 33 percent. Concurrently, Zambia’s government debt-to-GDP ratio has risen to 92 percent, one of the highest in Africa. It is still expected to rise to more than 120 percent.3

There has been no transparency from the government.

Of all Zambia’s trading and financial partners, China remains the most willing to assist Zambia’s quest for loans. Officially it accounts for almost thirty percent of external debt, but there are fears that the sum total of debts to China have not been fully captured in Zambia’s of official statistics (4). Financial analyst and development finance expert Trevor Hambayi puts the Chinese debt figure at US$ seven billion for infrastructure projects alone. ‘The unfortunate thing about the Chinese debt is that (…) we do not know what type of debt we have... there has been no transparency from the government’, he said, adding that this may be one of the factors that has prevented the International Monetary Fund (IMF) from supporting Zambia with a debt bailout package.

Talks between Zambia and the IMF on the bailout package have been going on for the last three years, but Hambayi said that, so far, there appeared to be no answer offered from the Zambian state to any debt questions. ‘They (the IMF) are requesting us that we put on the table transparently what kind of debt we have with the Chinese, what is the period in which we need to be able to repay this, what type of interest are we paying and is this debt tied to any infrastructure within the country?’

The IMF did not respond to our question whether the lack of transparency on the Chinese debt was the obstacle to the bailout package agreement, but several analysts in diplomatic circles, who wished to remain anonymous, concurred that this was the case. ‘They have serious concerns regarding the debt situation in the country’, said one. Meanwhile, according to the UK-based Africa Confidential newsletter, a COVID-19 ‘Rapid Credit Facility’ relief programme of US$ 300 million envisaged for Zambia, was withheld by the IMF after it noticed a tenfold increase in the cost of the Farmer Input Support Programme, which distributes fertiliser and seeds to farmers.

We will have to do repairs ourselves, but how?

Meanwhile, chairman Luka Mutale at the Kalense Multipurpose Cooperative and Justina Musonda, the secretary at the Mwelwa Cooperative south of Kasama town, are despairing. ‘The condition of the plants is expected to get worse once the Chinese engineers are gone’, worries Mutale, explaining that for now, the cooperatives are still benefitting from the agreement that offers free repair services for a five-year period from the time the machines were installed. Musonda already contemplates that ‘just now we will have to do repairs ourselves. But how?’

In a recent interview with the state news agency ZANIS, ZCF director general Chirwa rejected the complaints from the farmers. Saying he was aware of the criticism that the plants are ‘white elephants’, he called such views ‘ignorant’. ‘(The critics) should visit the rural areas where these plants are dotted to appreciate how much people are using them’, he said, whilst, a little later, criticising the farmers for not understanding their business. ‘The original idea was for the milling plants to provide maize meal to boarding schools, health facilities and other surrounding communities. People (the farmers) have not grasped this model’, he said, deftly avoiding to comment on the well-known obstacles Zambian farmers face with regard to transport and access to local markets.

But in Kasama the residents’ scoff at the notion that the milling plants will ever signal a change in their fortunes. The best some people here hope for is to be next in line for the spoils of a rotten system, which may just befall you if you openly profess your support for the ruling party ahead of the August 2021 presidential, parliamentary, and local government elections.