Letter from Bamako | The circus came to town 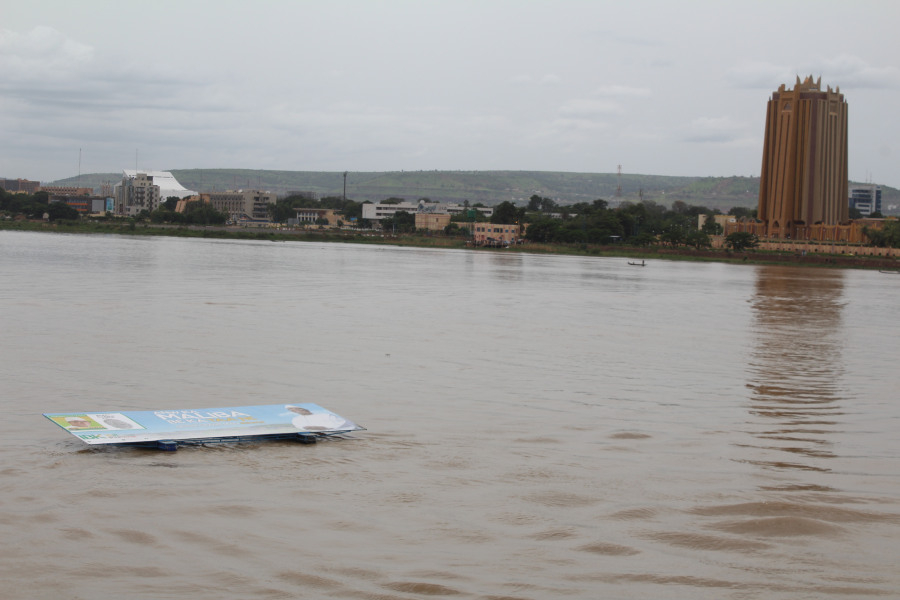 The recent elections in Mali are based on a colonial model, a ritual virtually nobody believes in.

We were crossing the river using what’s known here as The First Bridge and were looking at the water. What on earth was that, floating on the slow majestic flow of the Djoliba?
A portrait. On closer inspection it was a picture of President Ibrahim Boubacar Keïta, or IBK, attached to two pinnaces. Irresistible photo obviously.

‘Ah look! Boua dans l’eau!’ The image of Boua, the old one, an at times affectionate at times not-so-friendly term for the 73-years old Keïta, floating in the water had a few connotations that were probably unintended by the advertising agency that came up with the idea. The idea was to present IBK as the Messiah, hands and gaze tilted skywards. And so he appeared on thousands of billboards. Sure enough, this floating image should conjure up images of a Saviour walking on the water, even though the biblical connotation would probably be lost in an overwhelmingly Muslim nation.

But my friend and colleague saw the image as a re-election campaign coming to an ignominious end, with Mali’s president ending up many miles downstream, lost in the Delta as the water made its way to the Atlantic.
That clearly did not happen.

Mali’s 2018 election, and especially the excessive amounts of boredom it engendered, has prompted another question: what’s the use of this circus? And that’s what I’d like to probe in this piece.

Elections are an industry. The costly campaigns, the expensive election material, the expensive logistics of getting it in place in a country many times the size of France with major security issues and a crumbling infrastructure. Twenty-four candidates took to traversing the country, holding rallies, paying for ads, making videos. And then there was the security apparatus, necessary to create (a semblance of) order and at the end the – now almost mandatory – accusations of unfair play, invariably launched by the losing side. Boua did it when he lost in 2002 and 2007, his main challenger Soumaïla Cissé does it now. The two final contenders are both every inch a product of the same system that has brought Mali its current and particularly odious cocktail of political rot.

And then we haven’t even mentioned the many journalists (including yours truly) covering the circus, the many pundits and experts and hacks and wonks pontificating about What This Means to Mali, West Africa, the Planet and the Universe.

Elections like these also attract a most curious cottage industry, brought to you by the international donor community that has decided to fund this circus. We have voter education campaigns. NGO activity goes into overdrive. And we have observers. Everybody and his cat and canary flies in, takes up space in expensive hotels, occupies rooms in conference centres for meetingsworkshopsmoremeetingsandconferences. There is some benefit to certain sectors of the economy. After all, folks eat in (expensive) restaurants, they drink in (expensive) bars, may buy a few (cheap) souvenirs, that sort of thing. If you called them luxury tourists you would not be far off the mark.

In spite of their patchy knowledge of the country, its history, its political mores and particularities, observers are increasingly becoming the arbiters of these elections, even though they carefully avoid any judgement concerning the result. (The UN, operating a very costly and underwhelmingly successful mission in Mali has refrained from making any comments, still stung by its Côte d’Ivoire experience when they were called in to certify the elections and promptly accused by the losing side of backing Fraud/France/Uncle Fred. So they have smartened up a bit.)

If you are a smart citizen, you take cash from all sides and still make your own decision

Increasingly acting like royalty, the observer folks from the European Union, the African Union, the Economic Community of West African States, the International Organisation of La Francophonie, Democracy Heaven, Free and Fair Paradise send a few handfuls of observers to the safe parts of the country. Their findings they then put into handy statements that get read out by that other ritualistic element, very much part of this circus: The Press Conference (see picture above). Strangely enough, this observer element appears to be entirely absent in what is in all probability the most epically corrupt political system in the world; I am of course referring to the United States.

OK, I’ll grant you this. There is one thing a West African and an American election do have in common: they are won or lost with money. In this neck of the woods, anything up to three euros will do the trick. If you’re a smart citizen, you take cash from all sides and still make your own decision.

You can send fifteen armies of observers into the country, this will not change. And hence you hear observers having conversations in their hotels, their bars, their restaurants, their lounges and wherever else about all sorts of things – except what they’re here for. Office gossip, the new car they’ve just bought, house prices in Generic Suburbia Somewhere, anything but the experience of having to watch weird elections in some place or other. This makes perfect sense. None of them know Mali, let alone understand it. And next week it’s Peru. Or Cambodia. Or Malawi. Like the swarms dispatched here by the aid industry, they have loyalty to the organisation that sends them, never to the countries that receive them. Exceptions duly noted.

And what’s the popular response to all this? This:

This, you may believe it or not, was a polling station in one of Bamako’s most densely populated areas. In full view of this was an elaborate and very well attended wedding going on, a rather precise indication of peoples’ priorities. However, and this is absolutely crucial to understand: an elected head of state in countries thus “observed” derives a great deal of legitimacy from the statements by the likes of AU, ECOWAS, OIF and especially the EU, the world’s largest aid donor. Even if nobody shows up to actually give you that strangest of things…a popular mandate. This is a circus, conducted for the benefit of foreigners.

On a day in August, the Ministry of Territorial Administration (part of Mali’s bewildering election architecture, but that’s another story) declared Boua the definitive winner. When that pronouncement had been made, I found myself walking between the elegant ministerial complex known as the Cité Administrative and a road system designed to decongest this part of the capital, which it sometimes manages to do. Speeding along a bridge came one of Bamako’s ubiquitous green minibuses, with music blaring from its loudspeakers. It was covered in campaign posters and playing one of those forgettable campaign songs, written for the occasion. A monotonous beat with a disembodied auto-tune non-voice (omnipresent and toe-curlingly awful) intoning endlessly ‘IBK…IBK…IBK…’. The initials of Boua. No-one was following the minibus. It sped in and out of sight on its own, ignored by all.

That lone minibus and this roundabout. I cannot think of a better way to illustrate the futility of it all. Much will be made of a 35% voter turnout. Democracy will be pronounced to have been consolidated. But in truth, the vast majority of Malians did not vote, realising the extent to which this entire circus is irrelevant to their lives. And this is happening in a country that gave the world a unique Magna Carta of its own, in the form of the 13th Century Mandé Charter, or Kouroukan Fouga, an enumeration of the rights and duties of a citizen, part of the world’s human intellectual heritage. Surely, with its millennium-old history, Mali can do better than maintaining an expensive political bubble based on a colonial model propped up by foreign money and symbolically re-constituted every five years in a ritual virtually nobody believes in?