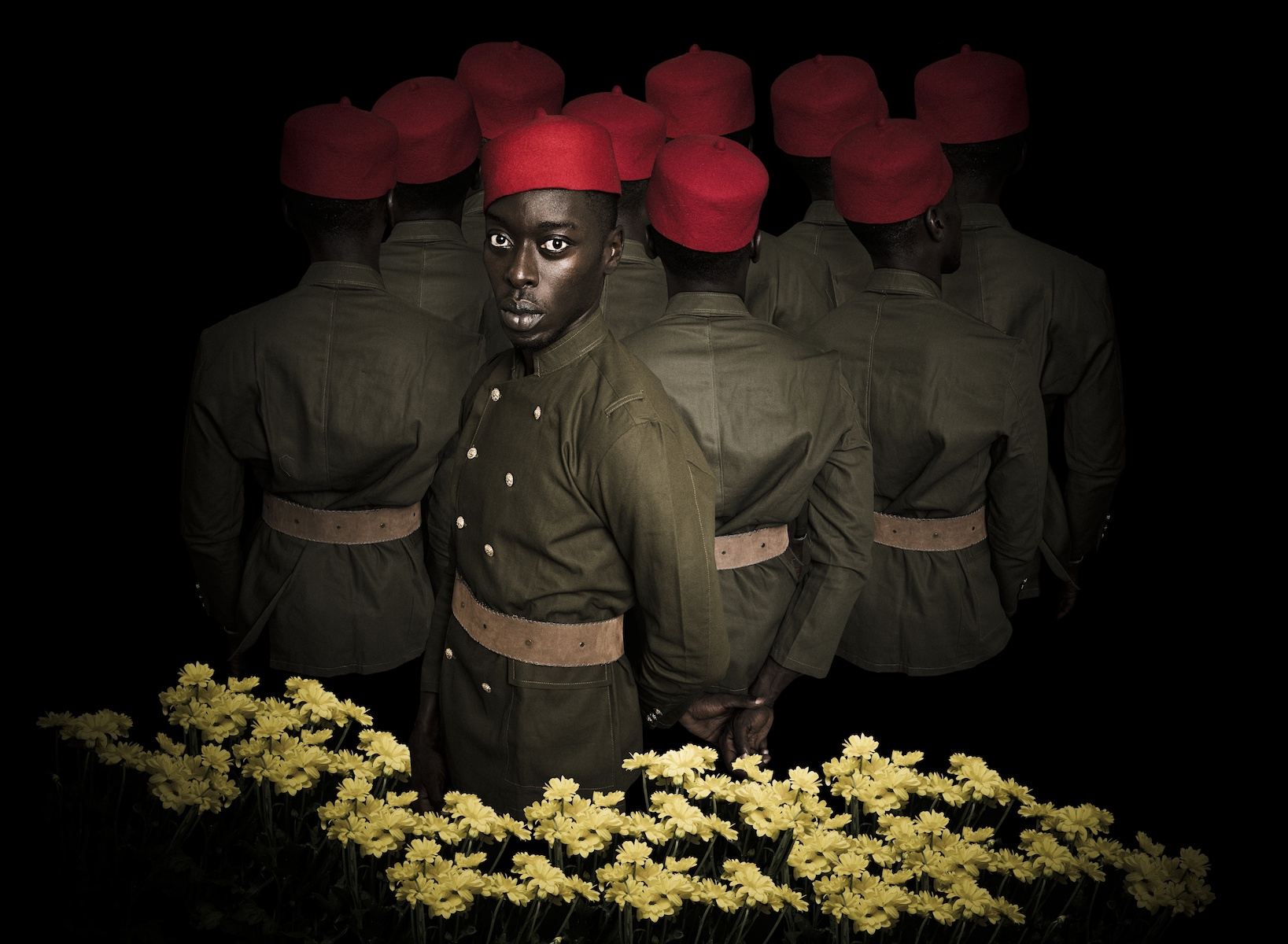 What are the defining moments of revolt and struggle in Africa and the diaspora? What unifies and defines these fights for freedom and human rights? These are the issues Omar Victor Diop tackles in his first solo exhibition. The answers represent a clear no to monolithic (his)storytelling as they feature key events such as the Alabama marches on Washington (Selma, 1965), resistance movements against colonial oppression in Southeastern Nigeria (The Women’s War, 1929) and the more recent Million Hoodie March in Nigeria triggered by the murder of Trayvon Martin in 2012. His death inspired the BlackLives Matter campaigns.

Diop appears as the main character throughout the series, enacting different roles including African railway workers, French migrants, Second World War soldiers, Jamaican maroons and members of the Black Panther Party. Diop’s works are rich in detail and symbolism, the elaborately staged tableaux commemorate slave revolts, independence movements, social justice campaigns and the events that sparked them – a testament to the power of collective organising, community campaigning and the enduring spirit of resistance.

For Diop, they constitute ‘a reinvented narrative of the history of black people, and therefore, the history of humanity and of the concept of freedom.’

The artist also acts as protagonist in Project Diaspora. Largely based on historical paintings, he reinterprets these honorific portraits imbuing them with contemporary football references. Celebrating four centuries of notable Africans in the diaspora, he illuminates the tensions of discovery, glory and recognition while facing the challenges of being framed as ‘other’. Diop imagines how these paradoxes are shared between modern day footballers in Europe and the sitters in the paintings.

The series features an intriguing cast of Africans in European history from the 15th to the 19th centuries. We encounter Frederick Douglass (1818-1895), the abolitionist leader who was most photographed person of his time; and Olaudah Equiano (1745-1797) a freed slave, writer and prominent activist in London. Other figures include St Bénédicte de Palermo (1526-1589), a saint in the Catholic and Lutheran church; Prince Dom Nicolau (c.1830-1860), a Congolose African leader; August Sabac El Cher (c.1836-1885), an early Afro-German soldier; and Jean-Baptise Belley (1746-1805), who fought during the French Revolution.

In the artist’s own words: ‘Football is an interesting global phenomenon that for me often reveals where society is in terms of race. When you look at the way that the African football royalty is perceived in Europe, there is an interesting blend of glory, hero-worship and exclusion. Every so often, you get racist chants or banana skins thrown on the pitch and the whole illusion of integration is shattered in the most brutal way. It’s that kind of paradox I am investigating in the work.’

Liberty / Diaspora by Omar Victor Diop is at Autograph, London from 20 July – 3 November 2018. Entry is free.