Nollywood is not ready to compete globally, despite what they are telling Nigerians 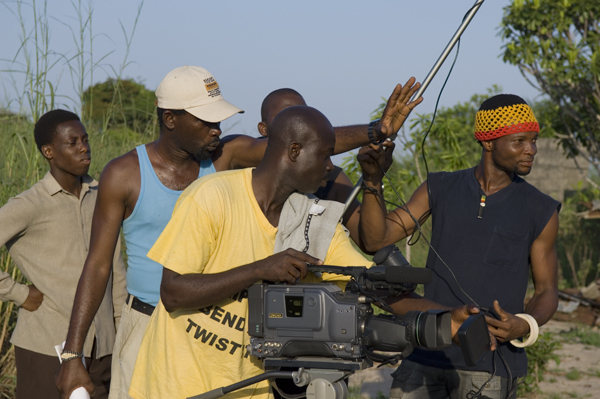 French President Emmanuel Macron recently took his first trip under his official position to Nigeria, a move that Quartz labelled as “low on policy, but high on culture.” To welcome, he was hosted at the legendary Fela Kuti Afrika shrine which serves as a hangout spot and concert arena. Over the night’s proceedings, a question of particular importance and irony arose. Mo Abudu, the founder of Ebony Life, Africa’s first global black entertainment and lifestyle network, asked President Macron how a Nigerian movie could make it to the Cannes film festival and pick up the Palme D’Or, one the most prestigious awards in film.

The question is important because Nollywood continues to gain more attention, its films have begun to screen in theatres abroad and at major international festivals. Production values are visibly rising and film centred content production continues to expand. And Ms Abudu is a crucial part of this expansion. It would make sense that targeting a festival like Cannes will be a major step, especially as Nigeria has never screened a feature movie there. Currently, the only proximity Nollywood has is the Cannes Metrages section where filmmakers essentially pay to have their shorts screened. Baby steps.

However, there is undeniable comedy to the question, for many reasons, most visible because Nollywood is not at the stage where the films being produced have the range of to feature in or compete in global conversations about the quality, purpose and vision of film. In business terms, perhaps, but no way in terms of plot, dialogue or the aforementioned production values, despite an increase in the number of expensive cameras being purchased. Exceptions of course exist, which will be explored later.

The film is leagues away from conversations about entering Cannes

Case in point, Ms Abudu’s last foray into the international festival scene came away with The Royal Hibiscus Hotel, a romantic comedy focusing on a chef and heiress returning home to manage her father’s hotel which is falling apart quickly. There is some tension with a rich hunky investor who naturally falls in love with her. If this plot carries many similarities with an early 2000’s Hollywood fare about hotels, and rich hunky men, we see it too. This is what Ms Abudu presents to the world as the best of Nollywood. Her last entry to the Toronto Film Festival was the not much superior comedy centring on a wedding joining together families from two warring ethnic groups. While the film will not reinvent any wheel or go down as a significant cultural contrition, it proves that Nigerians were willing to visit the cinema and pay money to see their own movies. Still, it is leagues away from conversations about entering Cannes, much less an award.

Another example of Nollywood being leagues away from that level of excellence are the nominees for the African Magic Viewer’s Choice Awards recently released. Social media reception was unimpressed, with a few articles mentioning the perplexing array of poor performances singled out for nominations. To be fair, the AMVCA’s are viewer’s choice, and get more hits for the red-carpet choices than the films itself. It also has some dodgy rules concerning eligibility, as in the past films that ought to be disqualified on the basis of release time, end up sweeping categories. Safe to say, AMVCA’S are not the AMAA’s (Africa Movie Academy Awards) which though not as buzzworthy pay more attention to the film process than to popular audience vote.

It is a worrying habit. It is the nascent Nigerian trait. A tendency to overinflate and prioritize the appearance of growth and excess over true development. It was visible in the Africa rising narrative, yet Nigeria is ranked the second country in the world with the worst electricity and the country with the highest number of poverty. For all of its self-congratulatory antics, Nollywood seems more concerned with projecting growth, than engaging in actual development. Industries are not built on the whims and agendas of one or two people, they are coalitions of a shared needs, vision, ambition others, but it seems on the vision front, Nollywood is desperately lacking. Even more regretful, is that the industry has turned itself into a kind of toxic environment for filmmakers who would like to place a priority on craft and offer some alternatives to the loud drama and crass comedy, not that those are necessarily bad things themselves. Somehow Nollywood has imbued that character, believing that an increase in the number of subpar content equals the development of the industry.

This is not a happy story. In March 2017, a young Nigerian director released his debut feature Ojukokoro, a heist comedy film that brought critical acclaim. Critics praised the plot and performances, with the writing singled out for its exceptional skill and use of multiple dialects. The film was also released around the same time as Logan, the final appearance of Hugh Jackman as Wolverine, and the live action remake of Beauty and the Beast. The latter films had production budgets of 127 and 160 million respectively. Ojukokoro, the movie did not officially release its production budget, but it is a safe assumption that the numbers do not come close to the big Hollywood studio releases. To add more strain on the young indie film, it was given a screening slot between around 2 and 4PM, times when young Nigerians, its primary target, would be busy with work or school or commuting somewhere. It has not been published whether the film managed to recoup the costs. It is highly doubtful. The movie was purchased by DSTV, for their Box Office and AfricaMagic showcase channels, both only available to select subscribers higher up the earning ladder. The movie was never released on DVD. “The people I made this movie for, most of them are not going to see it.” Dare, the film director says.

While many Nigerians where deprived of seeing the movie, somehow it was given breathing room in faraway New York where it was summed up as “Ojukokoro gets some room to breathe in New York after being stifled at the box office in Lagos.” But Dare’s story is not unusual. In a podcast interview, a respected Nigerian critic outlined three Nigerian movies he believed had the capacity to reinvent Nollywood. They are Kenneth Gyang’s Confusion Na Wa, Izu Ojukwu’s 76 and the aforementioned Ojukokoro. He remarked on the saddening reality that all those films as well received as they were never led to any suitable follow ups within the industry. Responding to this assertion, one of the three directors said “if you notice they were all our first films. You want to make a film for the art, the industry teaches you a lesson and you sit down make what they want and take your check.”

There are things to unpack from this tale, least of all the toxicity of Nollywood to innovation. There are also heavy infrastructural and ideological barriers that continue to effectively hinder the industry from self-improving. Add that to a worrying habit of silence when public discussions about film are made. Often Nollywood only responds when it is accused of doing something bad, with the usual line up of tired defences, with no attempt to engage or expand discourse, but rather shut critics up with the over flogged “you do it if it were so easy” line.

Taking on some of these challenges is what motivated Tunwa Aderinokun to launch TRINO Studios in 2012. Cutting their teeth with short films, that increased in quality over time the studio is primed to release in September, its debut feature. It has speculative and romance elements starring Zainab Balogun, Nollywood ingénue and veteran Chris Attoh. It premiered at Nollywood Week Paris to good reception. It is directed by Daniel Oriahi whose film Taxi Driver has made some impressive rounds internationally, but at home has barely been discussed after its release. Tunwa firmly believes that the industry needs a lot of work in terms of their filmmaking standards which he rates as “having a lot of mediocrity.” He doesn’t buy the logic that Nigerians are only predisposed to certain kinds of movies. “I believe if intelligent Nollywood movies are made that explore issues that Nigerians can resonate with, the film will do well.” Nigerians have also been known on social media to discuss shows like Insecure, Mr Robot, Game of Thrones and Grey’s Anatomy.

However, infrastructures are not fixed by outliers. It is an industry challenge. Currently, “there are not enough cinema screens to comfortable recoup a large investment” Tunwa says. “So, it doesn’t make economic sense to make too large an investment in a film project.” However, money is not the only thing we need to invest for development. There are multiple facets that can and should be done if we are truly to call ourselves a global industry.

In a series of Tweets Playwright and screenwriter (Green White Green) Africa Ukoh highlighted some of what he believes are the fundamental problems that could have been solved but continue to manifest. “Despite the magnitude of the problems, there are aspects under our control, and when we fail to put those aspects into order, that’s on us, not the Nigerian environment or government.” Some of these he states as “high avoidance tactics, where the right people don’t meet in the same room or if they do, don’t have the needed discussion.” In addition to “bad businessmen disguised as hustlers” and the general industry’s “failure to pursue the best possible establishment of cinema fundamentals”. Case in point, The Wedding Party Sequel, Nigeria’s biggest film which hired its director five days before production began despite having turned him down for the same job months ago.

‘Between creatives and hustlers, hustlers will always win’

A director remarked once, “nobody can afford to do long term thinking in this industry, everyone has to worry about eating”. It simply does not pay to be critical, as an anonymous source colourfully puts it, when referencing the silence around criticizing the gatekeepers of Nollywood “why would you deny yourself of Netflix money and put yourself on a pedestal to be fucked?”. A director in this podcast sums it up as, “between creatives and hustlers, hustlers will always win”. Perhaps Nollywood has too many of the latter, whom Africa has described as “reluctant to admit disinterest in the know-how needed to establish true industry”.

“No one interested in or capable of development avoids problem solving” Africa concludes. Perhaps this is the challenge with the Nigerian film industry. Despite good intentions (the rewriting Africa narrative), and some laudable steps, much of it is still a product of hype over quality. We could blame the critics for spewing criticism without having the full story, we can blame filmmakers for building weak defences to negate criticism, we can blame audiences for not believing enough in films from their people, blame business people for their misguided focus on the wrong aspects of the film business, blame pirates blame everybody but ourselves. When all we need to do can be as simple as communicating more honestly amongst ourselves and always working from a place of respect for motion pictures.

Alithnayn Abdulkareem is a development worker and writer based in Uganda. Her nonfiction explores art film, politics and development. She is an alumnus of the Farafina workshop, and was long listed for the 2018 short story day Africa Prize. She has been published by Quartz, Ozy, Transitions, The Africa Report etc.