Sammy Baloji: ‘It’s not yet history’ 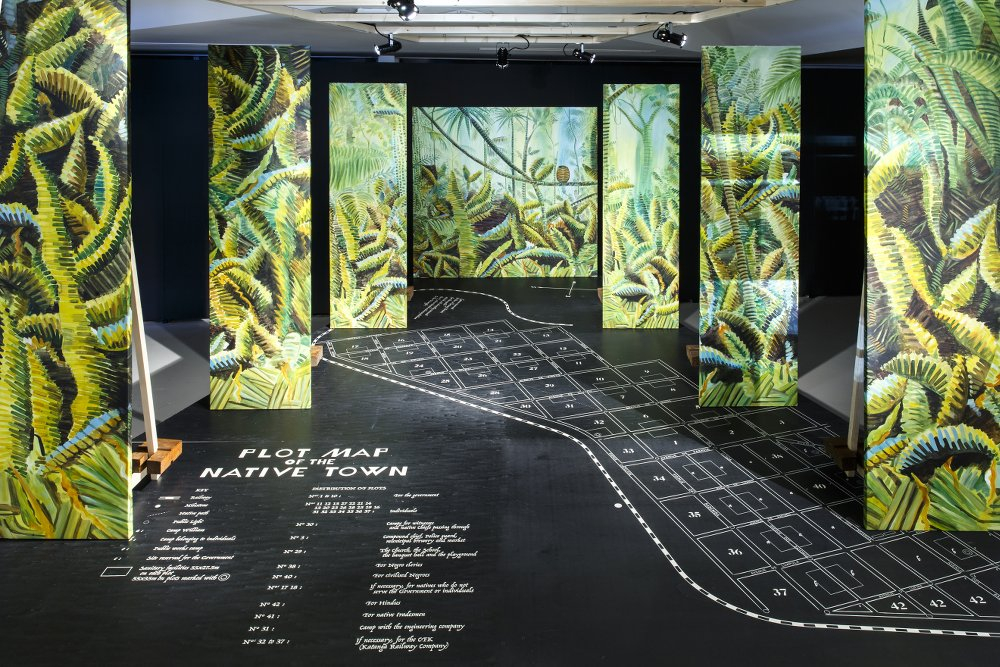 Joseph Kiwele’s theatre play Chura na Nyoka (The Toad and the Snake) had a simple message: different people don’t match. This story about two animals who are not able to maintain a friendship because of their biological differences was written in 1957. Commissioned by the Belgium colonial oppressors, Kiwele served his masters with a fantasy aimed to brainwash a children’s audience. Don’t mix – not with whites, not with other ethnic groups. Kiwele as His Master’s Voice, King Leopold’s jester.

This message of segregation inspired the social engineering under colonial rule. Lubumbashi, the capital of the mineral rich Katanga province, grew out of a blueprint for the ‘native city’. The maps of this mining town show the design of division in all detail. While colonial rule is rooted in racist ideology, Europe’s desire for minerals and wealth substantiate the colonizers’ endless exploitation.

In A Blueprint for Toads and Snakes, artist and photographer Sammy Baloji (DRC, 1978) recreates the colonial stage on which Kiwele’s play was performed within the context of medieval labour practices, dehumanization and loss. Next to the stage, on both sides, panels show more than hundred painted portraits, photographed by Baloji. A mix of former oppressors, religious leaders, freedom fighters, negro clerics and civilized negroes, colonial labels demonstrating how class differences were as eminent as ethnic ones. Risen out of the ashes of ethnic strife, the original works are now part of a collection at the University of Lubumbashi.

There is choral music with the video Tales of the Copper Cross Garden, Episode 1 and maps with the colonial design of the city. There’s the subtle view at the Amsterdam IJ lake where once the plunderers of the East Indian Company past.

‘It’s not yet history’, Baloji says at the presentation of his installation. As a teenager he encountered ethnic conflict in his city of birth. On the eve of Mobutu’s fall from power (1990 – 1993) the reminiscent of a colonial past played up, intensely.

A blueprint for toads and snakes is a must see. It’s a new production, including Baloji’s video made for Dokumenta 14 in 2017, initiated by the Amsterdam based Framer Framed. It is part of the institution’s multi-year research into the far-reaching consequences of raw materials policy on local infrastructure, culture and nature. In this research artists and researchers trace how (often colonial) powers created an infrastructure for the expropriation of raw materials, which led to a social classification that is often still visible today. Baloji’s installation follows Koempels, an exhibition on Dutch miners from the southers province of Limburg, In One’s Breath – Nothing Stands Still (2014 – 2017) by Vietnamese artist Tuan Mami on view at Art Rotterdam in 2017. And lastly Pressing Matters, curated by Kevin van Braak, presenting the works of West Papua artists Fitri DK, Agung Kurniawan and Muhammed ‘Ucup’ Yusuf.

About Tales of the Copper Cross Garden, Episode 1

The video was commissioned for Dokumenta ‘14.

Part of an installation, the video documents the process by which copper is drawn into wire from glowing, semi-liquid ingots.

A choral mass provides the soundtrack, while sporadic all-caps intertitles weave biographical details (Baloji grew up in the mining region of Katanga in the Democratic Republic of Congo, DRC) with a reflection on the role of the Church in the colonial enterprise in Africa.

On a wall perpendicular to the screen, a large-scale print of a grainy black and white photograph depicts singing choirboys.

Over their white robes, they wear large Katanga crosses: copper forms resembling the cross of St Andrew that, since at least the 13th century, were used in the mineral-rich region as a form of currency, as women’s dowry and as talismans buried with the deceased.

When, following Congo’s independence from Belgium in 1960, Katanga briefly seceded from the newly formed republic, three crosses appeared on its short-lived flag.

The film is directed by Sammy Baloji and editied by Simon Arazi.

Watch the short version of Tales of the Copper Cross Garden on Vimeo.