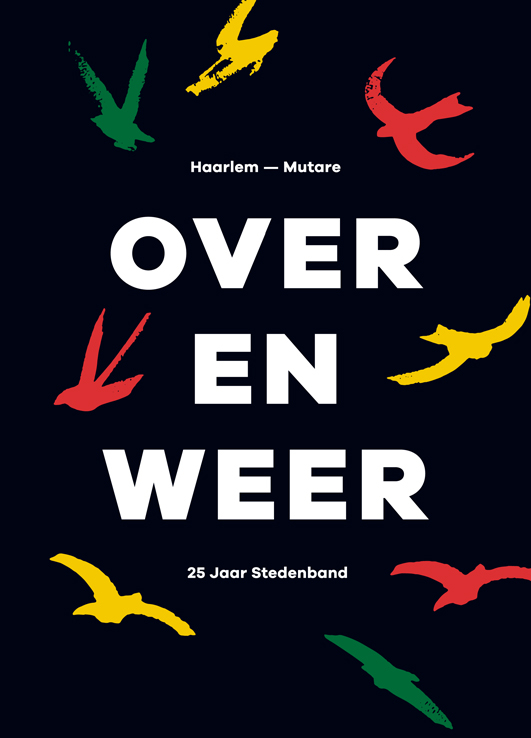 Over en Weer, a commemorative book celebrating the 25th birthday of the City Link between Haarlem, the Netherlands and Mutare, Zimbabwe, is testimony of a rich tradition of solidarity against all odds.

It was a common feature of Dutch society in the 1970s and 1980s: the existence of as many solidarity movements and groups as there were struggles for independence and against oppression and deprivation worldwide. Almost every so-called ‘third world country’ (guess where to find the ‘first world’?) had its own solidarity committee. Against the background of the Cold War and decolonization in a globalizing world, many people, especially within progressive political parties and organizations as well as the Dutch churches, closely followed international political developments. Every youth wing of a political party, trade union, local council, church, social movements (women, peace, squatters, environment) engaged with the Anti-Apartheid Movement in particular.

This sense of solidarity encouraged Dutch city councils to get into links with cities in the global South. It was different from the official twinning agreements between Dutch cities and cities elsewhere in Europe. Although equality and reciprocity were key words in describing the relationship with the cities in Africa, Asia or Latin America, funding of most exchanges and activities came from the local councils and citizens in the Netherlands.

The idea for a City Link between Haarlem, a city close to Amsterdam, and Mutare, in the south-eastern part of Zimbabwe, took root at the end of the 1980s. It started officially in 1993 when the Mayors from Haarlem and Mutare signed the City Link Agreement, as described in a book published on the occasion of the 25th anniversary of the City Link Haarlem-Mutare. The Agreement did not cover exclusively municipal and administrative contacts, but also broader involvement of the inhabitants of the cities. This took shape in the establishment of the Foundation City Link Haarlem-Mutare.

Although rooted in the tradition of solidarity, Zimbabwe and its cities were not an obvious first choice to create links with. But after a visit from a town clerk from Mutare, who, on the invitation of “Local Authorities against Apartheid”, where he met with the Haarlem Local Council, the Mayor and the Third World Platform in Haarlem, the idea for a link materialised.

However, the Zimbabwe government was increasingly becoming repressive and towards the end of the 1990s it started collapsing economically and at social level. The governing ZANU PF party and the military increased its grip on society and everything became politicized.

The Foundation City Link Haarlem-Mutare, with its partner organization in Mutare, achieved a lot in Mutare. It built low cost houses, a community centre and a library in two townships, developed sports activities with Dutch trained sport leaders, organized exchanges between artists and exhibitions, theatre workshops, peer education on HIV/AIDS, home based care, as well as volunteers to teach at schools in Mutare. In Haarlem they involved various possible partners, creating perspectives for actions of professionals, like teachers, nurses, constructors, artists etc.

The Foundation City Link Haarlem-Mutare carefully operated within the complex political environment, which was made even more complex in Haarlem itself, where local parties and people struggled to understand that the Foundation continued working in a country with such a repressive regime. Moreover, from the moment of its founding, the interest in Dutch society in international relations declined and development cooperation was no longer ‘sexy’, according to the Chairperson of Foundation. Funding for the work of the Foundation became a serious problem. But through cooperation with a broad range of partners in the Netherlands and surrounding countries, linking to actual issues like immigration and minorities, with diversifying funding, and with a very small staff of mainly volunteers, the foundation managed to survive. The partner organizations in Mutare understand that they cannot continue to depend on financial support from Haarlem.

The foundation is quietly resisting the new trade-aid mantra, the dominant idea of current development cooperation thinking: aid should also benefit the donors. But citizens of Haarlem do benefit from the exchange in the ongoing educational projects: they learn about different cultures and other people’s history. Working together with it local partner organisation in Mutare, the foundation practices real grassroots solidarity. The book is a testimony of a long-time friendship between distant people, a rich history and an uncertain future.

Over en Weer. 25 jaar stedenband Haarlem-Mutare, edited by Inge Crul. The book is in Dutch and includes an English summary. Published by Uitgeverij In de Knipscheer, 2018. More information about the book and how to order here.

Peter Hermes (VULA Consultancy) is an expert on Zimbabwe and South Africa.