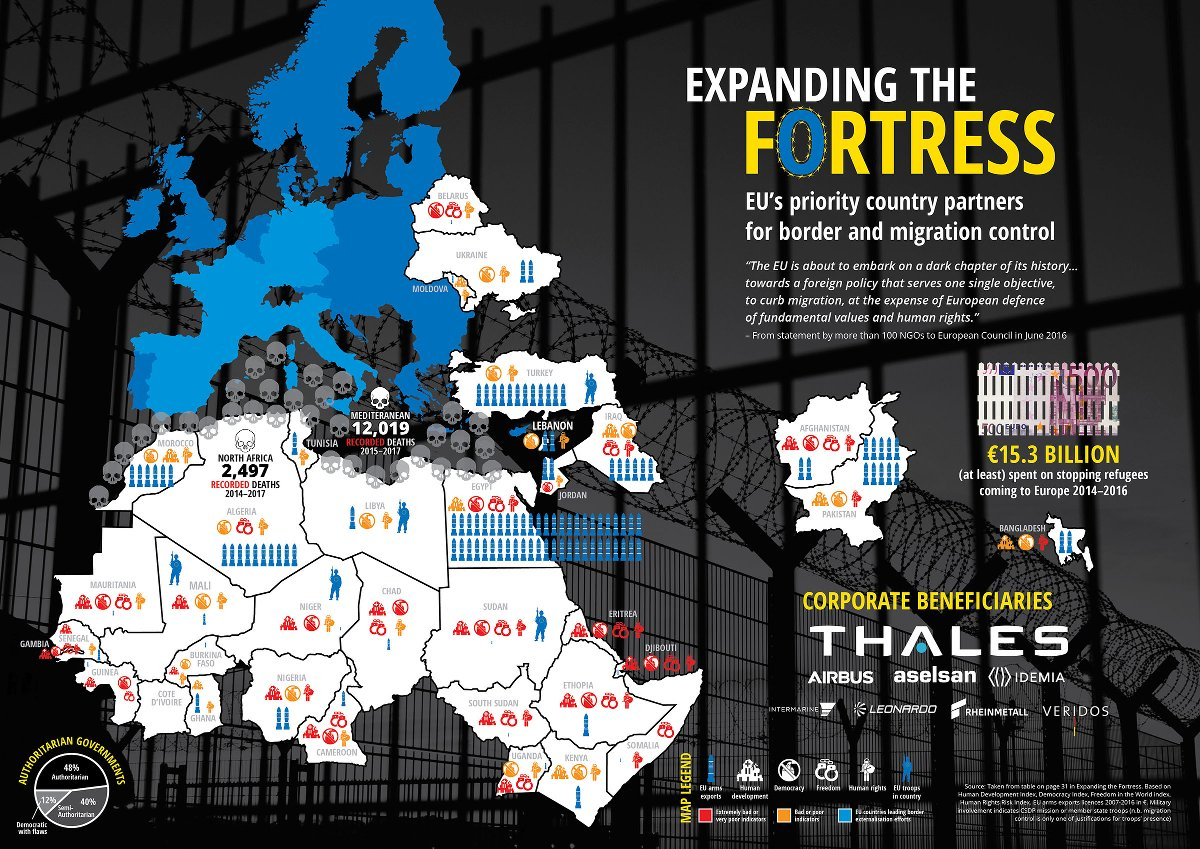 Thanks to externalisation agreements, European borders are now in Africa.

The EU has made migration control a central goal of its foreign relations, rapidly expanding border externalisation measures that require neighbouring countries to act as Europe's border guards. A new report by the Transnational Institute (TNI) and Stop Wapenhandel  examines 35 countries, prioritised by the EU, and find s authoritarian regimes emboldened to repress civil society, vulnerable refugees forced to turn to more dangerous and deadly routes, and European arms and security firms booming off the surge in funding for border security systems and technologies.

This report seeks to shine a spotlight on the policies that underpin this externalisation of Europe’s borders, the agreements that have been signed, the corporations and entities that profit, and the consequences for forcibly displaced people as well as the countries and populations that host them. It is the third in a series titled Border Wars that have examined Europe’s border policies and shown how the arms and security industry has helped shape European border security policies and have then reaped the rewards for ever more border security measures and contracts.

This includes collaboration with third countries in terms of accepting deported persons, training of their police and border officials, the development of extensive biometric systems, and donations of equipment including helicopters, patrol ships and vehicles, surveillance and monitoring equipment. While many projects are done through the European Commission, a number of individual member states, such as Spain, Italy and Germany also take a lead in funding and supporting border externalisation efforts through bilateral agreements with non-EU-countries.

What makes this collaboration particularly problematic is that many of the governments receiving the support are deeply authoritarian, and the support they are receiving often goes to precisely the state security organs most responsible for repression and abuses of human rights. The European Union in all its policies has a fine rhetoric on the importance of human rights, democracy and rule of law, but there seems to be no limits to the EU’s willingness to embrace dictatorial regimes as long as they commit to preventing ‘irregular migration’ reaching Europe’s shores. As a result, there have been EU agreements with and funding provided to regimes as infamous as Chad, Niger, Belarus, Libya and Sudan.

Find the full press release and download the report here.