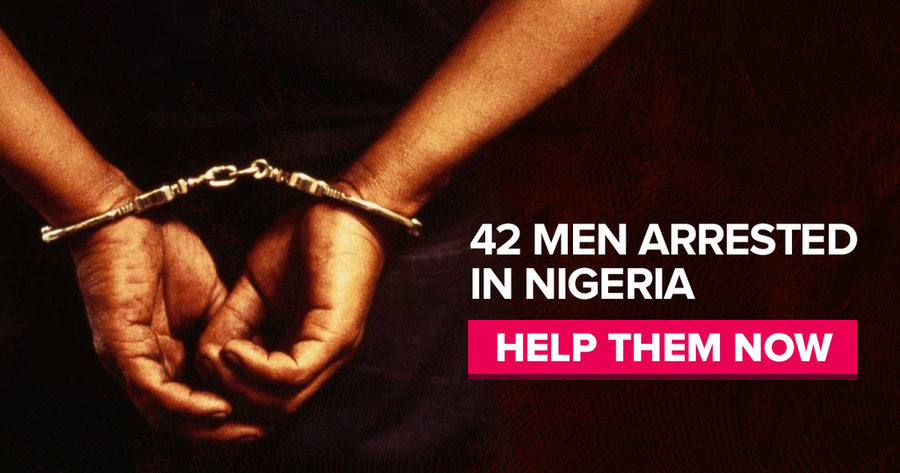 On Saturday the 29th of July 2017 the Nigerian police arrested 42 LGBT persons at a party in Owode Onirin in Lagos State. On a picture in one of the local newspapers that covered the story Ayϙ Adéné recognized a friend he had met ten years ago.

Splashed on the front page of the dailies, he's the first in a queue of 42 gay men who were arrested by the police in Nigeria this week. White singlet. White, like the long white garment that flowed to his ankles when I saw him.

It was the uniform of the Aladura Church, a Nigerian sect of Christians well known for their frenetic and frenzied approach to prayer. Prayer to heal the sick. Maybe cast out devils. Maybe cure same sex attractions too.
That sunny Sunday morning, his face subdued with a nervous smile, Michael sat with me by the soccer field along Awolowo Avenue in Ibadan. His big eyes, like saucers, were filled with watery innocence as he talked about his Grandma. He was staying at her house. She was very fond of him.

“I like staying with her, instead of at my parents’ house. In fact, I’m going to go to University in Lagos or Abeokuta”, he said. “Just to get away from home.” I understood. He had the air of some kind of geeky professor-in-the-making, even when he wasn’t saying much.

When I asked about his parents, his reply felt strained, and his gaze, and the conversation, were dropped.

Ten short years, an unethical law and a frivolous arrest later, it turns out Michael was right to be skeptical about his family. He now needs 2 sureties, family or neighbor, to be granted bail before his trial. Yet the same law by which Michael was arrested can also incriminate anyone else by association. Parents must choose between affirming their children and risking public ridicule, or turning their backs and sacrificing their own blood. Many often choose the latter.
In this sordid scandal, money in the millions will have exchanged hands, from the vulnerable, desperate and desolate victims of this brutish witch-hunt, to their captors: oppressive police, corrupt court administrators, and other agents of the Nigerian pseudo-theocratic state. Even if any of the 42 men meet bail conditions, they may no longer be able to return home.

Even if they are judged not guilty, which is unlikely, they have already been tried in the courts of public opinion. By unethically displaying Michael’s photograph, the Nigerian Media entertains a bloodthirsty cult of pseudo-moral savages who shall feast on the still-breathing carcass of his sullied reputation.

It is a worrisome plight, not just for Michael and the other 42 men. It is a fearful omen for the perhaps twenty million more homosexual men and women hiding in Nigeria’s shadows. The repression of some of us by the rest of us makes life a collective prison sentence for all of us, in which the dignity of being otherwise human is undermined by inhumane laws.