An exploration of power, the fear it generates and love in all its magical, addictive forms. Exclusive excerpt.

William Mawolo is sent to a small remote Liberian border town with a clandestine agenda: to investigate the mysterious disappearance of the paramount chief Tetese.

The townspeople however are far from happy about his presence, and matters are complicated by Mawolo’s attachment to the missing chief’s daughter Makemeh; who is unconcerned about her missing father.

Presented as ‘crime fiction’, Vamba Sherif’s is serious literature, a captivating account of the complexities of Liberian society and the inevitable clash between modern life and ancient cultures.

The hill upon which the mansion stood sloped down to a valley of swamps from where the road took off in a slight hillock toward the town centre. These swamps, rich but largely uncultivated, formed a boundary between Wologizi proper and the hill with the mansion, radio station and town hall. A mass of thatched huts was perched on both sides of the road, connected by a stream. That night the swamps throbbed with the chattering of insects and the cries of famished children. It was here that the darkness spewed out a remarkable figure: the carpenter’s houseboy.

William’s torchlight framed a face with bold eyes that nevertheless expressed an endearing softness, the mouth mirthful, on the verge of laughter.

The young man seemed to have been waiting for them, and his impatience was clearly visible because he could not stand still. On seeing him, Corporal Gamla rushed to him, about to slap him.
‘Don’t you dare, Corporal,’ William said.

The policeman was taken aback, and this perhaps emboldened the young man to say: ‘I don’t know why he’s so pent-up, sir.’

‘Chief, let me teach him some manners,’ hissed the corporal.

‘The Chief is not stupid, Gamla,’ scoffed the boy.

The boy whispered something to William, who told the corporal and his men to wait for them, and he followed the youth.

The path the two took was bordered with clusters of tiny vegetable gardens and led to a thatched hut. Inside, three stones formed a fireplace, and on a wooden pole hung a hurricane lamp, a clutter of utensils and all manner of leathery pouches. Showing William to a mat, the young man took a seat on another, facing him.

Scents of damp mud and wood that made up the wall, some of which had been nibbled by termites, teased William’s nostrils, and he began to sneeze.

They were not alone. On a mud bed attached to the wall a girl lay asleep under a single piece of cloth. She awoke with a moan and sat up. She was a lanky creature who exuded a musky smell of sex. The smell forced William to regard her: she was young, he could see that, perhaps of the houseboy’s age, and frail, her pert breasts barely concealed, her drowsy eyes gazing with contempt at William.

To this remark, the girl sucked her teeth. She seemed indifferent to the purpose of William’s presence in that hut and went on to tie her head-gear slowly, fasten her waistcloth about her and saunter out, but not without flashing William a hard gaze. He could not understand the source of her contempt for him, and was still thinking about her when he heard the militia accosting her.

‘Make sure the girl is left alone, Gamla.’

The hurricane lamp cast a flickering light on the youth’s face. Because he was sweating, his dark skin glowed, and he looked agitated.

There are moments when a gaze transcends the ordinary to become a medium through which an entire story is told. The young man’s gaze revealed its true nature to William, and this made him uncomfortable.

‘I know how much you hunger for the truth, sir. But there’s no way you can unravel the mystery around Tetese’s disappearance. You would have to wipe out the entire border town, the entire forest region, and even then no one would tell you about Tetese’s fate.’

William sat upright, struck by the force of the young man’s words, their implications overwhelming him.

The youth did not answer immediately. Fear threw his mind into a labyrinth of conflicting emotions. One aspect of it incited him on and the other cautioned him, so that he seemed unable to muster the courage to go on. He fetched a gourd of palm wine, took large swigs, and wiped his mouth with the back of his delicate hand, and then in a trembling voice said: ‘Because something binds them that is stronger than death, sir.’

‘Tell me what it is,’ William said.

The young man lifted his eyes to meet his own, and for a while their gaze was locked. Just as he was about to speak, his jaws dropped and a painful cry escaped him. William turned to see the girl standing at the door.

She’d been listening in on them.

No amount of persuasion could make the young man part with the secret that night, and William left the hut empty-handed.

Over and over, he thought about the force the youth had described, a force much more powerful than death that controlled the entire forest region. And once again, he thought of the Poro. 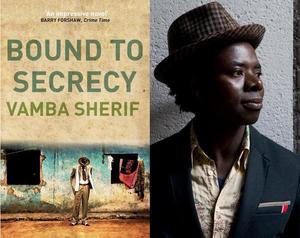 *Vamba Sherif was born in Kolahun, Liberia in 1973. In his early teens he moved to Kuwait, where he completed his secondary school. The First Gulf War compelled him to leave Kuwait and settle first in Damascus, Syria, and then in The Netherlands, where he read Law. His books include: The Land of the Fathers, The Kingdom of Sebah, The Witness and The Black Napoleon.

Order your copy of Bound to secrecy HERE.