A Prison Full of Princes and Lackeys 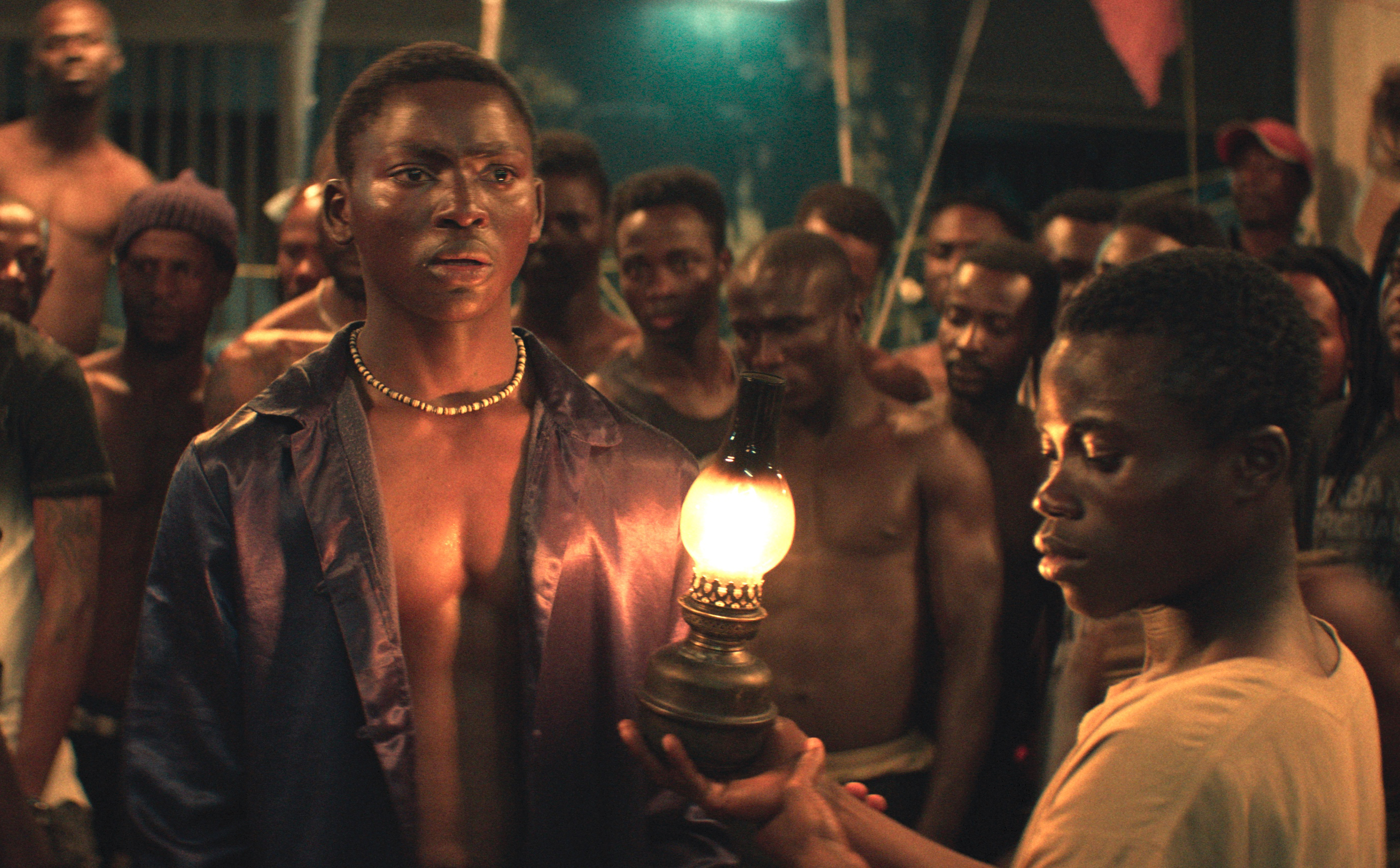 On July 9, 2021, the award winning Ivorian movie Night of the Kings premiers in Dutch cinemas. Its director, Philippe Lacôte (Abidjan), wanted to explore what fantasies can be developed when your body is locked up.

A young man is sent to ‘La Maca’, a prison in the middle of the Ivorian forest ruled by its inmates. As tradition goes with the rising of the red moon, he is designated by the Boss to be the new ‘Roman’ and must tell a story to the other prisoners. Learning what fate awaits him, he begins to narrate the mystical life of the legendary outlaw named ‘Zama King’ and has no choice but to make his story last until dawn.

Night of the Kings is built around a memory you have of a childhood visit to Abidjan’s notorious MACA prison. Can you tell us about that memory?

As a child, I'd go once a week along the edge of Banco Forest in a shared taxi to visit my mother who was incarcerated there for political reasons. As there are no visiting rooms at MACA, I waited among the prisoners who freely circulated amid the visitors. I was listening to this prison’s language. It was a world that I loved to observe, even if I wasn't able to decode everything. I had the impression of being at the court of some archaic kingdom with all its princes and lackeys... MACA is therefore a prison which left me with strong images and memories. Night of The Kings is fed with these images to expose the prison from the inside, from the inmates’ point of view. The film certainly looks like it’s shot inside a correctional facility.

Did you use an actual prison (or former prison) as the setting of the film? If so, what sort of cooperation did you need from local authorities to shoot there?

The outside sequences of the prison have been shot at the actual MACA. This prison, being a very sensitive place with political prisoners still being incarcerated, we wouldn’t have been able to shoot the film without a real cooperation with the penitentiary administration and the Ministry of Culture, which always supported the project.

As for the inside of the prison, it has been reproduced in two colonial buildings of Grand-Bassam, a city located one hour from Abidjan.

Along with my set designer, Samuel Teisseire, we wanted to keep the spirit and some very distinctive things about the MACA, like the very peculiar shape of the windows, but we didn’t try to reproduce the prison exactly as it is. Many African prisons inspired me for the inside sequences. For example, the paintings on the walls are reproductions of existing paintings. I didn’t want décoration or anything superfluous because the elements from the prison world have to be useful. This is certainly why it feels like a real prison.

The movie offers a very realistic portrait of prison life—a world with its own histories, hierarchies, and rituals. What was the research process like? Did you speak to many prisoners about their experiences?

Night of the Kings originally comes from a discussion I had with a childhood friend coming out of the MACA prison. He’s the one who told me about the ‘Roman’ ritual where they choose a prisoner who has to tell stories. So the story of the film is definitely based on a real tradition at MACA. I immediately pictured the setup and imagined a character in the middle of this arena. Prison always got me interested as a place where the balance of power we can find in our societies is being experimented with. It’s even more true when it comes to unequal societies. Being sent to prison today in Africa is something which can happen easily, either because you are poor or because you are being made an example to ensure the laws are respected. African prisons are full of young people being incarcerated for years in collective cells without being tried. But beyond this social reality, my researches have been centred around the prison as a place where narratives are being created. What stories are told in prison? What fantasy can be developed when your body is locked up? I defend the idea that every human group living in the same place for a certain duration of time creates a culture. And every culture generates poetry.

Your first feature, Run, followed a young man on the run after assassinating the country’s prime minister. Night of the Kings, tells the story of a crime boss who comes to power at the end of civil war. Neither film is overtly political, but they draw on political events. What role do politics play in how you tell stories?

Run, like Night of the Kings, depicts young men evolving in a territory in crisis. I want to show how these individual paths collide with collective history. Night of the Kings says that Africa is perhaps the very last ancient theatre of today, where tragedy and stakes of power unfurl in a raw, frontal, and eminently visual manner. The interesting part of politics is the narrative side of it.

The pickpocket who’s been chosen as the Roman, or storyteller, in the prison is the narrator of his story. But he’s part of a larger prison ritual that involves poetry and song and dance, as the other prisoners join in the performance. How would you say that ritual is connected to the broader West African tradition of the griot, and what influence has that tradition had on your work?

Before answering this question it’s important to say what a griot is. In West-African societies, the griot is named ‘Djéli’ meaning blood. In an essentially oral culture, he’s the one nurturing the social fabric. The griot acts as a storyteller, historian, and praise singer but these three things can’t exist without each other. That’s what my narrator ‘Roman’ does when he transforms the life of a real character into a myth. Throughout his story, he goes from realism to magic, from political fact to legend. Roman’s storytelling in the middle of the prison resonates with the art of the griots. Like them, his story is punctuated by songs. Additionally, the setup of Night of the Kings also draws its inspiration from urban cultures. It is close to battles or stage performance.

What fascinates me in contemporary Africa is how different times live in the same space.

The Roman’s story about the origins of Zama King travel back to a pre-colonial time of kings and queens—something that one of the prisoners recognises couldn’t possibly be drawn from the 19-year-old gangster’s actual life. Why did you want to connect your story, which is set in modern-day Cote d’Ivoire, to this other, mythical—even mystical—pre-colonial history?

What fascinates me in contemporary Africa is how different times live in the same space. For example, some Dozos hunters playing their own role in the film are wearing traditional costumes full of amulets with Puma shoes! I’m using these time clashes to go from one world to the other and to show the beauty of pre-colonial Africa through processions, majestic costumes ... without falling into some sort of idealism. For Roman, these anachronisms show how he shapes his story with diverse fragments, like a modern-day Shéhérazade.

Koné Bakary makes his big-screen debut in Night of the Kings as the protagonist Roman. How did you find him, and what was it like working with a newcomer to play the lead role in your film?

We arranged castings in different low-class areas of Abidjan. Koné Bakary came to the one at Attécoubé, which is the neighborhood of the Microbes gang leader Zama King, whose story is told in the film. After that, we did a two-month workshop with thirty young actors starring in the final film. We also cast dancers, slammers, and martial artists. Ivory Coast is a breeding ground for great raw talents. That’s how we found Koné Bakary. It was his first acting experience. The birth of an actor on screen is both risky and fascinating. Besides me, there were some doubts among the crew of the film about this choice. But as soon as the shooting started he established himself as an obvious Roman. On the set, he had to lay low because the other actors were so involved in the story that they wanted to get him.

The Roman accepts that it is his destiny to be the prison storyteller, without understanding why he was chosen; Blackbeard, the chief of the prison, likewise accepts his fate when it becomes clear to him. For you as a filmmaker and storyteller, do you believe that we are free to make our own choices? Or are we part of a larger system that defines us?

The notion of destiny underlies all my characters’ journeys. Almost like an invisible thread running through their lives. But it doesn’t mean they don’t have free will. It actually reflects my personal vision. Roman does not feel trapped by his fate, he freely accepts his fate. This situation will give him the strength to free himself with his own words and allow him to reveal himself as a storyteller. This is why Roman starts his story by repeating a sentence read on a prison wall: ‘If God says yes, no one can say no’.