Stop Filming Us | The Film That Should Never Have Been Made 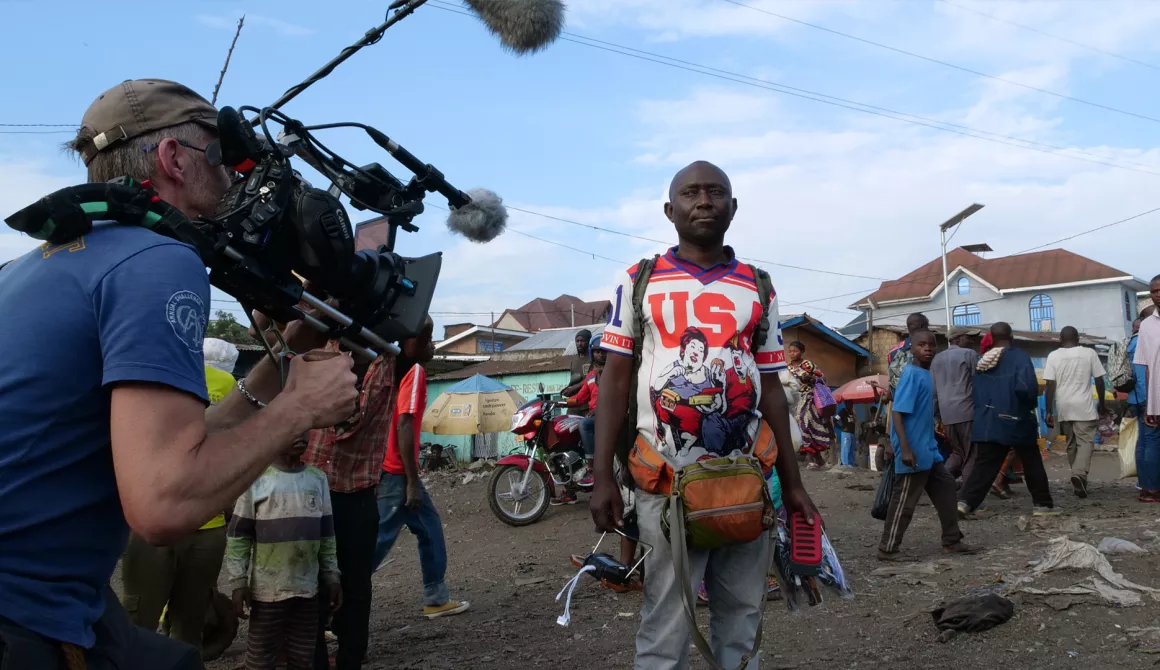 The documentary Stop Filming Us won the Dutch Movies Matter Award and received favourable reviews by the Dutch press. Unbelievable, according to postcolonial media scholar Emiel Martens. ‘Postema throws the discussion about the Western view of Congo at least ten years back in time'.

In Stop Filming Us (2020) Dutch filmmaker Joris Postema (47) goes to the city of Goma in the northeast of the Democratic Republic of Congo, where numerous violent conflicts and even more Western aid organizations have been in the past 25 years. It’s the third time in ten years time that he has traveled to Goma. The first time, in 2010, he was filming in the city on behalf of a Western aid organization, which forbade him from walking down the street or staying in an unguarded hotel – too dangerous.

The second time, a few years later, he was working with a local organization and was allowed to go wherever he wanted and sleep in a hotel without security. Where Goma first felt as ‘the most dangerous place on earth’, the second time Postema saw ‘a completely different city’. This conflict in his mind serves as the departure point of Stop Filming Us. An interesting departure point, but in its implementation Postema misses the mark more than once.

For those who haven’t yet seen the film this may come as a surprise. Postema’s Stop Filming Us won the Dutch Movies Matters Award [at the Movies that Matter human rights film festival] and the [Dutch] press also largely praised the film. Positive reviews appeared in NRC, de Volkskrant, Het Parool and De Correspondent, among others. The film is currently broadcasted on Vitamine Cineville, Picl and Pathé Thuis. This means that thousands of Dutch people sitting at home will travel with Postema to Congo during this period.

‘Am I, as a Western filmmaker, able to show the Congolese reality?’, Postema asks himself in Stop Filming Us. A rather problematic question. Apparently, he assumes that he can’t be a postcolonial filmmaker as a Westerner, and that a Congolese filmmaker ís able to depict reality.

In the field of Postcolonial (Media) Studies, this (outdated) way of thinking is referred to as racial essentialism: attributing specific characteristics and behaviors to groups of people because of their racial identity (or racial ‘essence’). In reality, people’s thoughts and actions are not determined by a racial ‘essence’, but shaped by a variety of experiences, insights, and encounters. In other words, a postcolonial perspective is not reserved to people based on their ethnic background.

From the first scene onwards it becomes clear that the camera is aimed at himself and his Congolese crew. The common thread of Stop Filming Us is the questioning of his own position as a Western filmmaker. Unfortunately, in every self-reflective scene Postema shows that he doesn’t have the knowledge nor the skills to question his own position. In fact, it’s his crew members and other Congolese who point him to his problematic position – and Postema just doesn't seem to understand them.

For example, there is a scene in which Postema asks his crew members whether he did ‘something neo-colonial’ during the first few weeks of filming. Not only does this question show that he doesn’t know it himself, but when his crew members come up with an example – the unsolicited distribution of cookies to children on the street – he repeatedly tries to defend himself, including with the rebuttal: 'It was just one cookie.'

The most painful scene follows when Postema asks his crew if he should stay or leave. The opinions are divided. The filmmaker himself is of the opinion that he should stay to finish his film, but his Congolese interpreter Gaïus Kowene – Postema doesn’t speak French – indicates that the Dutchman may leave as far as he is concerned.

Postema is visibly shocked and asks Kowene for an explanation. He responds that Congolese people can make the film themselves and that he’s afraid that Postema ‘does not go deep enough and remains on the surface.’ The incident, and especially Postema's shock reaction, shows that the filmmaker does not understand his own problematic position and is thus not aware of the history of colonial representation and the current postcolonial sensitivities in the Congo.

When adopting a postcolonial perspective, it’s important that you take an informed and committed look at (Western) colonialism and its ongoing effects in today’s world; that you make a critical analysis based on this historical and ethical awareness.

Because of their socio-cultural embedding, many Western filmmakers are stuck in colonial thinking and doing, with the result that they, either consciously or unconsciously, contri-bute to what is often called empire cinema: films that (re)produce colonial ideas. But this is not per se the case. Postcolonial filmmakers are filmmakers who, regardless of their origin, confront colonial practices and discourses on the basis of critical analysis.

In short, the question of Postema if he, as a Western filmmaker, is capable of making a non-colonial film in the Congo has already been answered in advance: that’s possible, as long as he directs a critical-analytical postcolonial lens to the subject.

Unfortunately, Postema’s postcolonial lens is far from sharp. It remains astonishing how little the filmmaker knows about the subject of his own film. It may be commendable that he does not present himself as an ‘expert who knows everything about the region and the subject’ (as a Congolese man remarks in the film), but this is the other extreme. It sometimes seems like a strategy of Postema to position himself as ignorant and un-inspired as possible.

However, a postcolonial filmmaker, and certainly a Western postcolonial filmmaker, cannot afford him- or herself such a position. The unequal power relations require knowledge and engagement. Only that can bring about awareness and change. Going in ‘blank’, with ‘good intentions’, as so many Western filmmakers have done before Postema, is counterproductive, especially when the colonial past and postcolonial present are as complex as in the Congo.

Postema says he wants to capture ‘Congolese reality’, but instead he is mainly looking for a positive perspective on Northeast Congo. In the film, he tells a Congolese audience that the purpose of his film is to ‘show the positive sides of Goma’s daily life.’ In addition, the Congolese filmmakers and photographers that Postema follows in his film explicitly focus on the strategy of positive representation.

For example, activist media artist Mugabo Baritegera says that he wants to tell ‘the positive story about Goma’ with his work. The city's Western humanitarian narrative, about conflict, disease and hunger, is indeed so one-sidededly negative, that positive stories are needed to ensure the diversity, complexity and dignity of the place. But it starts to wrench when positive images are presented as ‘reality’. As postcolonial intellectual Stuart Hall already argued in the 1990s, positive images often just as well lead to racial essentialism.

In Stop Filming Us, the strategy of positive images is presented time and again as a solution to the representation problem. For example, when Postema discusses two scenes on the same topic with his crew (one directed by himself and one by Baritegera), Postema’s crew points out to him that he filmed a man on the street getting whipped. Baritegera didn’t film this. According to the crew, this type of punishment is normal in the Congo and therefore not significant for Baritegera.

Apparently, for Baritegera the strategy of positive representation means that negative images are to be avoided. Later, Postema’s crew explains that corporal punishment is a colonial remnant and has therefore become normal. This is the crux of the postcolonial lens: questioning, not obscuring, images. ‘We should not be silent about things that are going wrong’, says Ley Uwera, a Congolese photographer with whom Postema discusses a photo of refugees. Postema, however, completely ignores this in his response: ‘I see the kind of cliché photograph we always see in the West.’

At the end of the film, Postema again asks if he should have stayed or left. ‘You should have better left,’ it immediately sounds. Painful but true. Stop Filming Us doesn’t sharpen the discussion about the Western view of the Congo, as Kevin Toma wrote in de Volkskrant, but throws it at least ten years back in time. As such, the film does more harm than good – and indeed shouldn’t have been made.

Emiel Martens is Assistant Professor in Postcolonial Media Studies at the University of Amsterdam and Erasmus University Rotterdam. In addition, he is one of the initiaters of IDleaks , an organization dedicated to better communication on international development, and the founder of Caribbean Creativity an organization dedicated to producing, programming and promoting Caribbean and other non-Western films. He is the producer of Welcome to the Smiling Coast (2016) and Gifts from Babylon (2018).

This article was originally published in Dutch by One World magazine.